Bed bug infestations are the worst! Unfortunately, they are notoriously hard to get rid of. If you are suffering from a bed bug infestation and prefer more natural treatments, you may be looking for what types of insects naturally eat bed bugs. Or, maybe you are trying to see what sorts of natural predators can live in your home and prevent a bed bug infestation.

Do Bed Bugs Have Natural Predators?

The problem with most parasites is that they have specialized in a very specific niche. For instance, fleas are closely related to scorpionflies. Though the flies have lots of naturally occurring predators, few predators are capable of following the fleas onto the mammalian bodies where they live. Thus, fleas have eliminated many of their natural predators by adapting to life as a parasite.

Bed bugs are no different. As they have invaded our homes (and bedrooms!), they moved into a place that is purposely sparse on other insect predators.

While there are a number of insects that will technically eat bed bugs (see below), most of these insects are either not safe, or simply not something you want crawling around your mattress as you sleep.

There are no real “natural predators” that habitually prey on bed bugs or have evolved to eat them as their primary source of food. So, keep in mind that although bed bugs do have some bugs that will eat them, few of them are suitable as a form of natural population control.

The following list contains both real predators of bed bugs and myths that are commonly propagated on the internet. Do you know which is which?

Spiders are part myth, part real predator. It depends entirely on the spider’s method of hunting and its size. Tiny spiders are often too small to eat bedbugs, while the biggest spiders may ignore bedbugs in favor of larger prey.

Believe it or not, there is one species of spider that has been scientifically proven to eliminate bedbugs! The species Thanatus flavidus is a species native to Eastern Europe that is the perfect size.

T. flavidus does not use a web. Instead, it hunts on the ground for its prey. Unfortunately, it would take somewhere between 20-40 spiders per room to eliminate an average bedbug infestation.

While other spiders (such as wolf spiders, crab walking spiders, and jumping spiders) can be the right size to eat bed bugs and hunt along the ground, they are not necessarily something you would want to cohabitate with. Almost all spider species can bite, and most spider bites are more painful and itchy than bedbug bites.

Believe it or not, cockroaches will eat anything. However, sites on the internet that claim cockroaches are “bedbug predators” are propagating a bit of a myth. While a cockroach will readily eat bedbugs and bedbug eggs if it happens upon them, there is no evidence that cockroaches readily seek out bedbugs. Cockroaches are well-known to be scavengers – essentially taking the easiest food source available.

Cockroaches can survive on garbage, dead plant matter, and all sorts of other meals that are much easier to obtain in the average household. Furthermore, cockroaches like a moist environment, such as those around a sink or in a bathroom. In a bedroom, a cockroach may quickly dehydrate and die. So, cockroaches are not really bedbug predators even if they do sometimes consume a bedbug or two.

This one is unsurprisingly true. Ants eat about every other type of insect that they can find. Just Google “Ants Eating X” on the internet and you will find ants devouring about any other organisms you can imagine.

Theoretically, if you move an ant colony into your bedroom you will certainly eliminate the bedbug. In fact, ants like Pharaoh Ants specialize in eating other ants and small insects like them.

The only problem is that when the ants run out of food they will start trying to eat any other source of food they can find. This could mean you if you are the only thing in the room.

While you can certainly take on a single ant, an entire colony is a challenge even for the most experienced pest eradicator. So, we don’t recommend flooding your room with ants.

The Assassin Bugs are a group of related insects with long mouthparts used to bite and suck the fluids out of other insects. The masked hunter bug is a particular species of assassin bug that apparently evolved in places like bat-caves and rabbit burrows where insects like bedbugs were common before humans arrived on the scene.

Juvenile masked hunter bugs cover themselves with dust and sand as camouflage, and commonly inhabit homes as a hunting ground.

Of all the predators on this list, this is the most “talked about” natural predator of bedbugs. Though they do eat bedbugs regularly and likely evolved to eat bedbugs and their relatives, there is no evidence that you can use masked hunter bugs to eradicate an infestation.

In fact, if you are finding lots of masked hunter bugs in your house it likely means there is a steady food source. You may actually want to check for bedbugs if you start finding them!

Think this is a myth? Think again! Although 99.9% of moth species have absolutely no effect on bedbugs, there is one species that has been shown to eat both bedbugs and their eggs.

Pyralis pictalis, otherwise known as the painted meal moth, has been shown to seek out and eat bed bug eggs. Apparently, when the larvae of these moths run out of normal food (such as dried cereals), they turn to about anything else they can find.

Interestingly, these little insects could constitute a natural form of bedbug control – though this has not been tried in a scientific setting.

Furthermore, centipedes have a natural aversion to human spaces – where they would most likely be killed. So, it’s very unlikely that centipedes could be used to control bedbug populations in any meaningful way.

While this predator may seem like common sense, there is little evidence that lizards are a natural predator of bedbugs. Some sites claim that lizards and frogs will eat bedbugs, and they surely would if that is all they were offered.

But, bedbugs are far too small to be normal prey for most lizard species. Furthermore, lizards like geckos often hunt on walls where bedbugs are unlikely to ever be found.

Since most lizards prefer larger prey (like crickets or moths), and the fact that lizards are not likely to squeeze into your bedsheets looking for prey, it is very unlikely that lizards would perform very well at eliminating your bedbug problem.

Are There Any Natural Pesticides that Kill or Prevent bedbugs?

Fortunately, there are a few different naturally occurring substances that can kill bedbugs. In fact, one of the most commonly used bedbug treatments is Diatomaceous Earth (DE) – a naturally occurring mineral substance made out of the shells of marine microorganisms called diatoms. See the section below for more information on how to use DE. 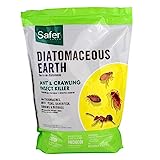 If You Have a Bed Bug Infestation, Don’t Mess Around.

Bedbug infestations can go from a minor inconvenience to a full-blown health hazard in a short amount of time. If you have any indication of a bedbug infestation (including bites, exoskeletons, or even masked hunter bugs in your home) you need to act fast.

There are many ways you can eliminate bedbugs without toxic chemicals using heat, vacuums, diatomaceous earth, and other methods. Check out our Bed Bug Guides to take care of your infestation fast!