Lyme disease is the #1 vector-borne disease in the United States and is spread from the bites of infected blacklegged ticks (also known as deer ticks or Ixodes scapularis). Roughly 50% of adult ticks carry Borrelia burgdorferi which is the bacterium that causes Lyme disease. Most infections to humans, however, typically occur from bites from infected nymph ticks (immature ticks), where only ~20% are infected with the bacterium.

Ticks are not born with diseases, but rather pick them up from infected hosts. White-footed mice carry bacteria that they pass on to ticks. When ticks bite humans, they pass on these diseases to humans and pets.

Making your property less habitable for ticks is your first line of defense against potential infection; however, broad-spectrum insecticides, which are often recommended for tick control, also kill off good insects (honey bees, lady bugs, etc). What if we could avoid broad-spectrum treatments while specifically targeting the ticks?

Enter Thermacell tick control tubes. This is a great product for a homeowner who is proactive in the fight against Lyme disease and other tick-borne diseases. 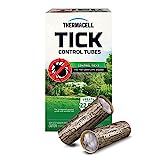 What is a Tick Tube?

Mice pick up the Permethrin-treated material and use it to line their nests, effectively treating their own spaces and rubbing the insecticide into their fur.

The idea behind this form of tick control is to reduce the localized spread of Lyme disease right at the source before the tick can infect a human or pet host.

Each Thermacell package comes with multiple individual tick tubes depending on the acreage you want to treat.

Young ticks primarily feed on mice, which is the essence of how Thermacell tick tubes work. The tubes are made from biodegradable cardboard and are stuffed with cotton nesting material. The nesting material is treated with Permethrin, which is not toxic to mice (it won’t kill them) but is toxic to ticks that feed on the rodents.

Once the tubes are placed strategically around the yard in places mice frequent, such as under decks or bushes, in sheds or wood piles, or along rock walls, the mice around your property will find and use the cotton material to line their underground nests with. Once inside the nest, the mice get the treated cotton all over their fur, exposing the ticks feeding on them to the toxic active ingredient Permethrin.

Permethrin is a synthetic form of a natural insecticide found in the chrysanthemum flower. This active ingredient has a powerful knock-down effect on ticks and other insects. Permethrin essentially attacks the tick’s central nervous system which results in paralysis. The tick is unable to perform normal body functions including feeding and eventually dies.

Permethrin is extremely effective for tick control and has shown up to 99% efficacy in exterminating ticks. This active ingredient is also safe to use for humans according to the EPA and FDA and is more than 2,250 times more toxic to ticks than to humans.

How to Use Thermacell Tick Tubes

One of the best things about Thermacell Tick Tubes is that they are very easy to use. The first step is to identify places in your yard with good coverage and where mice like to frequent including under sheds, woodpiles, bushes, flowerbeds, and along stone walls.

Next, simply lay the tubes roughly 10 yards apart and in areas where you have identified mouse activity or where mice like to frequent.  The total number of tubes to use depends on acreage but as a rule of thumb:

You may need additional tubes in locations with above average amounts of shrubs, tall grass or woods.   Be sure to lay the tubes flat so that the mice can get access from both ends of the tube.

Also, make sure that the areas where you place the tubes are dry and free from too much moisture. Mice like to use dry nesting material so areas prone to floods or have poor drainage or marshy ground are not ideal for application.

Inspect the tubes regularly over the next couple of weeks. If you find empty tubes, this is a good sign that the mice are taking the bait. This also indicates a rodent hotspot so consider adding more tubes to the same location or moving untouched tubes to the new location.

You can also move intact tubes to new locations after a few weeks when it is obvious that there is no rodent activity in the current location.

Please note that you do not need to place the tick tubes on a mowed lawn or exposed areas. Your main focus should be on covered areas where mice tend to travel and nest such as the ones mentioned above.

Best Time of Year to Use Tick Tubes

You should use Thermacell tick tubes twice a year for the best results. The first application should be in spring (between April and May) when the nymph ticks appear, and the second application in summer (late July) when the tick larvae hatch.

The summer application is critical since this is around the time when mice are making their new summer nests. The ticks hatched during this season are also going to be the nymphal ticks when spring rolls around, and most people get Lyme Disease from nymphal ticks.

Why Use Thermacell Tick Tubes?

There are other options for tick control including tick sprays, so why should you choose tick tubes for your pest control?

There are a few advantages that are unique to using tick tubes and which make a compelling case for their use.

First, these tubes are very environmentally friendly. The tube is made from biodegradable material so you don’t have to worry about littering your yard with plastics. You can also rest easy if you misplace or forget to remove the tick tubes from your yard.

Secondly, the tick tubes are targeted and focus on just the pest that is likely to spread Lyme disease specifically to ticks in their nymph stages. There is no evidence to suggest that these tick tubes are dangerous to bees and other non-target insects. The same cannot be said for insecticidal sprays which tend to work indiscriminately.

Furthermore, there is minimal exposure to Permethrin and therefore less chance of getting sick from overexposure. Permethrin generally is safe to use but can still cause health problems when mishandled or misused.

You won’t be touching any of the treated material when handling Thermacell tick tubes. The product is also safe to use in a yard with pets or children although it is always a good idea to keep the tubes out of sight of curious hands and paws.

With that said, if you have a large infestation in your yard and really want to focus on the best possible protection, you may want to consider using both tick tubes and calling a professional to spray for your yard.

Considering that there are over 30,000 reported cases of Lyme disease every year (with the real unreported number around 300,000), it is essential that you are proactive about protecting yourself, your family, and your pets against Lyme disease and other tick-borne diseases.

Thermacell tick tubes are effective, affordable, and easy to use. This is also an ideal product for people who are hesitant to use toxic sprays and insecticides. Tick tubes represent a clever and innovative way of dealing with ticks and the dangers that they present to people and animals.

Get the best pest control guides straight into your inbox!