Menu
Menu
The Verdict
Terro ant bait is cheap and it can work, but there are more effective ant baits on the market if you're willing to pay for it.
Efficacy
5
Ease of Use
9
Safety
9
Value
7
Reader Rating5 Votes
3.7
The Good
Simple to use containers
Very affordable
The Bad
Not the most effective bait on the market so it's not as likely to wipe out the infestation as alternatives
Can be messy and prone to spills when trying to tear off the tabs on the traps
7.5
Bug Lord Rating
DoMyOwn.comAmazon

One of the best ways to get rid of ants is with a good bait system. The principles of ant baiting are simple. Place the bait where the ants will find it, and toxic compounds in the bait slowly kill the colony when the ants bring the bait back to the nest.

The process is simple, effective, and affordable for most ant infestations.

We’re here to tell you all about one of the most popular ant-baiting systems: Terro. This system uses borax in a sweet, sugary formulation to attract and kill ants. Borax is low-toxicity for humans but intensely toxic to insects, so this bait will do the job without harming your family or pets.

But of course, no pest control method is perfect. In this Terro ant bait review, we’ll tell you about how it works, how to use it, and its pros and cons. Also, are there better alternatives to Terro ant bait?

The active ingredient in Terro bait is borax, also known as sodium borate, sodium tetraborate, or disodium tetraborate. Borax is found in many cleaning products, as well as industrial products like glazes. It’s even used to make slime!

Borax baits are sweet and will work on any ants that are attracted to sweets and sugar. This includes most of the ants that commonly infest houses, such as Argentine ants, ghost ants, cornfield ants, pavement ants, acrobat ants, white-footed ants, little black ants, odorous house ants, crazy ants, and big-headed ants.

Carpenter ants will occasionally go for Terro, but they are not as sweet-loving as other ants in general.

Borax kills ants by interfering with their digestive system. The brilliance of borax lies in its time delay. An ant will not die instantly after being exposed to borax. This sounds like a bad thing, but it allows the ants to take the bait back to the colony and spread the borax to the other workers and the queen. The ants also leave pheromone trails right to the bait, helping more workers pick it up and spread it further.

Terro baits are also available in outdoor traps. These work pretty much the same was as the indoor version, but the outdoor traps are designed with stakes so they don’t move around outdoors.

With these traps you snap off the tab on the side of the trap and then the ants crawl up in the device to take the bait. 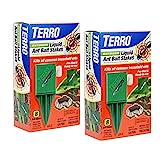 Whether you use baits indoors or outdoors, the result is a chain reaction that will slowly but surely decimate ant colonies.

Where to Deploy the Bait

It’s important to put ant bait in places where the ants will actually find it. So if you are placing the bait indoors, look for places with lots of ant activity. Kitchens are a safe bet. If you’re placing them outdoors, look for places with lots of ants, and place them around the perimeter of your home. If you can find the path ants are using to get into your home, place bait along it.

Whether you are placing the bait inside or out, don’t spray any other pesticides or repellents along with it. This will discourage the ants from picking up the bait. You want to encourage ants to find the bait and swarm the bait so as much as it gets to the colony as possible.

How Long Does it Take to Work?

In the beginning it may feel like you suddenly have way more ants, but this is totally normal. Remember, the magic of ant bait is in the delayed reaction. The ants will start dying off in time. Within a few days you should see number diminish, and you should notice a significant difference by the end of the first week.

If you have had a hard time identifying the best places to put your bait, you may have to move it around to find the sweet spot. You should replace your ant bait if the tray is empty, or if it’s in any way contaminated. Sometimes ants make their way into the trap and die as well, which makes the bait less appealing to other ants.

If a week goes by and you see no change, you may have to try a different type of bait. Some ants will prefer a protein-based bait like Maxforce. Contrary to popular belief, ants do not just eat sugar, so sugar traps may not always work.

Advance 375A is a protein ant bait. If you find that ants aren’t interested in your liquid or gel baits (sugar baits), you may need a granule protein bait.

Ant baits like Terro are really easy to set up and forget. It’s also hard to mess up since you just need a few ants to take the bait and they’ll alert the rest of the foragers to come to get the rest. This is usually much easier than tracking down the home colony and killing it directly with pesticides.

The baits are designed for ants and that’s exactly what they kill. The chemicals all stay in the trap, and you don’t have to worry about it getting all over food or killing other beneficial insects such as honey bees.

Pre-mixed and Ready to Go

While it is possible to make your own borax ant bait, the concentrations of sugar and borax have to be well-calibrated. Otherwise you risk a solution that’s so toxic the ants won’t touch it or not toxic enough to kill effectively. With Terro, it’s all done ahead of time!

Slower Than Other Methods

It takes time for ant bait to work, whereas methods like spraying or dusting can reduce the number of ants you see much faster (though may not kill the entire colony, so you risk them coming back after some weeks or months). This may be an important consideration if you have a severe ant problem that’s impacting your quality of life.

Borax Is Not the Strongest Ant Bait

Terro or another borax bait can certainly handle smaller infestations, but there are stronger, more effective ant baits out there. The tradeoff is that borax is very safe, non-toxic, and affordable.

Terro does the job when it works, but the traps can be a bit prone to leaking, and ants can become stuck inside. When this happens, less of the bait ends up where it belongs – in the colony.

If Terro doesn’t quite do the trick for you, here are a few examples of some stronger ant baits that may work better. 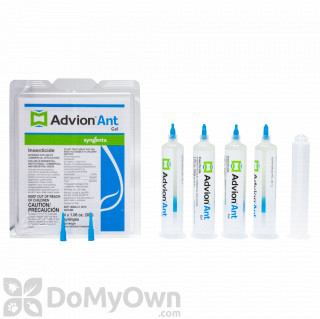 Advion gel bait is extremely effective due to a more advanced poison than borax.

Advion works basically the same way that Terro does, but it has a different active ingredient – Indoxacarb. Indoxacarb works even better than borax because it can spread much further through a colony. Studies on Indoxacarb have shown that it can spread to secondary and tertiary targets, unlike borax.

Borax can only spread to secondary targets – in other words, the ant that picks up the borax can pass it along to its neighbors, but the chain stops there. Advion can spread from those neighbors to their neighbors, which dramatically improves the rate at which the colony dies out. 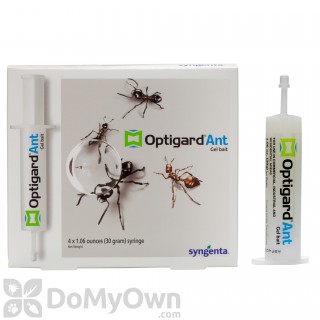 Optigard is another sugar bait that’s very effective at eliminating the queen of the colony.

Unlike Terro, the active ingredient in Optigard is a true insecticide – Thiamethoxam.

This makes Optigard quite potent. Laboratory assays of Optigard compared to other ant baits showed that it’s more effective at killing queens, which means less chance of having to reset traps. Remember – if you don’t kill the queen, you haven’t killed the colony. The ants will just recover their numbers and return.

The one thing to keep in mind is that you’ll need to be more careful handling and leaving Optigard around pets and children. Unlike borax baits, pesticides in general are quite harmful to humans (though I wouldn’t go around drinking Terro either!).