Menu
Menu
The Verdict
The Spartan Mosquito Eradicator has a scientific basis, but the cost is way too high when most people could make a DIY trap at home with ingredients they have laying around for free.
Efficacy
5
Ease of Use
9
Safety
9.5
Value
0.1
The Good
Easy to deploy mosquito bait
The Bad
Takes 2 weeks to kill mosquitoes
Extremely expensive for what you get
Not the most effective method of attracting and killing mosquitoes
5.9
Bug Lord Rating
Amazon

Update: The Spartan Mosquito company is now subject to a class-action lawsuit against them, saying these devices do not work at all. As you’ll see in our review, we find many issues with these devices and you could make one from household items for ~$1 or less, so needless to say we think you should stay away!

Prefer to just be recommended something that actually works? The Thermacell Patio Shield is similarly priced and will keep mosquitoes away from your outdoor living areas. 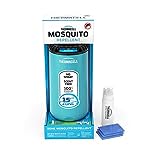 The Spartan Mosquito Eradicator uses yeast to create carbon dioxide – the same process that is going on when you add yeast to a bread dough so it will “rise”.

With a simple formula of sugar, salt, yeast, and water, the Spartan Mosquito Eradicator releases a stream of carbon dioxide for hours – attracting mosquitoes and some other biting insects.

In the above photo you can see the contents of the tube. Sugar, salt, and the few little tan bits are the yeast.

The Spartan Mosquito Eradicator is a large, ~11″ tube with a hook that is used to hang the device from a tree or bush on your property. Once you fill the tube with water, the yeast begins eating the sugar, growing, and dividing – releasing large amounts of carbon dioxide in the process.

The cap of the Spartan Mosquito Eradicator has a series of small holes, allowing mosquitoes to venture inside and eat the mixture which is fatal for mosquitoes. Though the ingredients for the Spartan Mosquito Eradicator are not listed on its website, on the box the ingredients are listed as “yeast, salt, and sugar” – so it seems completely safe to use around family, friends, and pets.

What Does the Spartan Mosquito Eradicator Do?

This device functions on a very simple basis. Yeast is a living organism (a fungus) that loves to eat sugar and reproduce. In doing this, the yeast releases lots of carbon dioxide. The Spartan Mosquito Eradicator is a small plastic tube designed to keep the yeast happy – producing carbon dioxide for as long as possible.

The device is loaded with water and hangs from a short tree branch or tall bush – about 6 feet off the ground. The device should not be placed in the sun, as the yeast will get too hot and die. Likewise, the device should be placed as far as possible from the area you want to actively enjoy because it will be actively attracting mosquitoes.

The Spartan Mosquito Eradicator is NOT a trapping device in the sense that mosquitoes are supposed to get stuck in the tube. The company owner says the mosquitoes enter the tube, eat from the mixture inside the tube, then fly off and die within 2 weeks. So this is more of a mosquito bait/poison, rather than a trap.

How does the Spartan Mosquito Eradicator Claim to Work?

It has long been known that one of the signals mosquitoes use to find and bite humans is the attraction to carbon dioxide. As we breathe, we continually breathe out carbon dioxide. Mosquitoes smell the carbon dioxide and follow the scent back to an unsuspecting victim just trying to enjoy the outdoors.

These tubes essentially try to trick mosquitoes by supplying many sources of carbon dioxide around your property. If well planned and maintained, the tubes should draw mosquitoes to the traps, have them eat some of the material inside, and then die off. This is supposed to keep them on the perimeter of your property and not your back patio – allowing you to enjoy the summer without mosquito bites.

If placed in the early spring, the idea is that many of the emerging mosquitoes will be killed off after feeding from the tube before reproducing – thereby reducing the total population of mosquitoes throughout the warmer months. Claims on the device’s website suggest that the device works for 90 days, but is most effective in the first 15 days.

Based on the biology of yeast – it is unlikely that the yeast is actively producing carbon dioxide this whole time. However, if the initial population of mosquitoes is heavily reduced in the first 15 days, it may help to limit the local population.

The theory behind the Spartan Mosquito Eradicator is fundamentally sound and valid, but how effective it is will depend on the size of each population of mosquitoes, effective placement of the tubes, and setting the tubes very early in the mosquito season.

The Spartan Mosquito Eradicator can work but it is not ideal for every situation. To understand the limitations, it’s best to take a look at what we know about carbon dioxide as a mosquito attractant.

Furthermore, a steady stream of carbon dioxide alone is not enough to overpower the evolutionary methods that mosquitoes use to hunt for victims. Carbon dioxide is important, but large groups of people or stinky animals can easily overpower a simple carbon dioxide trap. For instance, researchers found that a hamster in a slightly dirty cage was a better attractant than a carbon dioxide trap!

While this is no justification to put a hamster outside in a trap for mosquitoes to feed on – it does show the limitation of carbon dioxide by itself. If you plan on having a party or spending lots of time outside where you will be sweating, you might be a more appealing attractant than simple carbon dioxide traps.

Will This Product Harm Bees or Other Insects?

The ingredients listed on the tube only contain three ingredients (yeast, salt, and sugar) – all of which are completely safe for bees, butterflies, and hummingbirds.

In fact, few other animals or insects will likely show interest in the tubes because they are not attracted to the carbon dioxide it is giving off. Research has shown that without a light source, only mosquitoes are attracted to carbon dioxide traps. Plus, these household ingredients are safe to eat, so they should pose no risk to your health or your family’s well being.

Is the Spartan Mosquito Eradicator Worth the Money?

For most people, I would say these devices are not worth the money and some may consider them a “rip off” because of how cheap they would be to make yourself.

For $30, you get 2 plastic tubes with caps, some sugar, salt, and a bit of yeast. Only 1.4 ounces per unit! So roughly 1.2 ounces of sugar, .2 ounces of salt, and a pinch of yeast. This is probably 5 cents worth of raw material if you’re buying in bulk.

I’m a fan of paying for convenience, but charging $30 for two of these tubes that cost so little to make is too much for me to stomach.

Build Your Own Mosquito Trap

Considering that a 4-pack of Spartan Mosquito Eradicators costs nearly $60 from most retailers – you may want to experiment with creating your own yeast-based mosquito traps.

The idea is simple: mix the right amount of yeast, salt, sugar, and water to create the perfect environment for yeast to grow and produce carbon dioxide. You will see this in the slurry you create as small bubbles rising to the surface.

By creating a funnel into the bottle or jar you are using for the yeast, you make it easy for mosquitoes to get in, but hard for them to get back out. This gives you an added benefit over the Spartan Mosquito Eradicator in that it will actually trap the mosquitoes inside and not allow them to leave.

Researchers have perfected a recipe for yeast-based CO2 traps:

First, find a bunch of liter-sized plastic bottles. You will need approximately 4 bottles per acre of property that you own. Fill each bottle ⅓ to ½ full with the mixture above. Using a piece of paper, create a narrow funnel that directs mosquitoes into the bottle. The bottom opening should be only slightly larger than an average mosquito. Create a hook out of wire or use string to place the traps in the shade, near areas of high humidity and standing water where the mosquitoes are likely reproducing.

These traps (like the Spartan Mosquito Eradicator) will work best during the first 12-15 hours. During this time, the yeast is actively growing and producing carbon dioxide. After this time, the sugar source will begin to run out and the traps will have to be remade. Keep refilling and refreshing these traps with fresh yeast, water, and sugar until you notice a significant reduction in the mosquito population.

If you’re still finding mosquitoes are an issue around your home, I suggest looking into more powerful and effective mosquito traps as well as yard sprays for mosquitoes.