Menu
Menu
The Verdict
RatX is a very safe and readily available rat/mouse bait, but isn't as effective as true rat poisons. You may find you need to switch to something more powerful.
Efficacy
4.1
Ease of Use
8.9
Safety
9.8
Value
4.9
The Good
Safe for use around pets and children
Dehydrates rodents so they'll smell less when dead
The Bad
Many people report mice and rats eating the bait, but no drop in rodent activity
No scientific studies or evidence done to prove efficacy of the product
5.6
Bug Lord Rating
Amazon

Rats and mice are two of the most notorious pests in the world. Ever since humans started farming, we’ve been plagued by these greedy rodents. Rats and mice eat the same kind of foods we do, with a special preference for cereals, grains, and nuts.

Unfortunately, they are also vectors for disease. Famously, the Black Death that killed millions in Europe during the Middle Ages was caused by fleas that were spread by rats. Even today, rats and mice carry diseases such as hantavirus, leptospirosis, tularemia, and Salmonella.

Rats are also capable of structural damage. Like all rodents, they need to constantly gnaw to keep their teeth from growing too long. As a result, they will chew holes in wood and potentially bite into electrical wires. It’s estimated that rats and mice cause $19 billion in economic damage every year in the US alone. 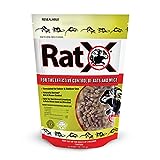 If you have rats or mice on your property, you’ll want to get rid of them. The most common ways to do that is by using traps or poison bait. Each has its advantages and drawbacks. In this article, we’re going to take a look at a unique product designed to control rats and mice: RatX Pellets by EcoClear Products.

RatX is a type of rat bait that comes in pellet form. Most rat baits are a mixture of an attractive bait (something rats like the smell and taste of) and a poison that kills rats once they eat it. This means rats need to eat the RatX for the product to be effective.

While RatX is a bait, it’s unique in that it doesn’t actually contain any toxic poison.

You’ll find it on the shelf next to rat poison, and it can be helpful to think of RatX in the same way. Certainly, you use it as a poison to kill rats, but there are some crucial differences.

RatX works by attracting rats and mice to eat the bait. Once the rats have done so, the bait begins to accumulate in their stomach. The special formulation of the bait stops rodents from feeling thirsty, so they stop drinking. Over time, this causes the animals to dehydrate and die.

There’s no toxicity involved which means should your cat or dog stumbled upon a dead rat and eat it, there’s no harmful secondary poisoning that can occur.

What makes RatX stand out is that the ingredients contain no poison. The pellets are a combination of inert ingredients, which are there to either improve the taste or the shelf life of the product and make it attractive to rodents. Then there are the active ingredients, which do the actual killing.

RatX is made of two active ingredients. 55% of the product is made of corn gluten meal, which is a naturally occurring product that comes from the milling of corn. Corn gluten meal is used as animal feed in farming and is non-toxic to most animals.

How RatX Controls Rats and Mice

RatX causes rats and mice that eat it to dehydrate and die. Once the animals find the pellets, they will probably return for several feedings, so it’s a good idea to keep placing RatX pellets until there are no more signs of rodent activity.

Once the rodents eat the bait, it will kill them in around three to five days.

What About the Dead Rodent Smell?

One of the problems with regular rat poison is that you can’t control where the animals will die. This is an especially big concern with rats because of their larger size.

A poisoned rat can die inside a wall void, attic, crawlspace, or somewhere else you can’t easily reach it to retrieve the body. As the rat decomposes, it can produce an extremely disgusting smell.

For that reason, most people prefer to not use rat poison around their home, but RatX has a unique benefit here as well.

RatX gets around this problem because it dehydrates the rodent. The active ingredient strips the rodent’s body of water. This causes them to mummify, reducing the smell by up to 90%. Dried out rat carcasses don’t smell, so RatX can be used in situations where a conventional rat poison would be a bad idea.

You’re not guaranteed to have no dead rodent smell, but it will be significantly less and maybe even unnoticeable.

Is RatX Safe to Use Around Children/Pets?

Since there’s no toxic poison in RatX pellets, it’s one of the safest rodent products on the market. Neither of the active ingredients, corn gluten meal or salt, are harmful to humans.

The fact that corn gluten meal is often used as an agricultural feed demonstrates that it doesn’t hurt other animals. RatX is specially formulated to take advantage of a quirk of the biology of rats and mice. As a result, it is ineffective on almost every other animal. Humans, dogs, cats, and just about anything else can eat RatX pellets without any ill effects.

Another great feature of RatX is the fact that it won’t travel through the food chain. If a dog or cat or even a bird of prey eats a rodent that has consumed a lethal dose of RatX, it won’t be affected by the bait.

It’s still a good idea to keep kids and pets away from RatX pellets but it’s good to know that even if they do accidentally consume some of the pellets, it won’t do them any harm.

You should also be careful about using RatX around any domestic rodents. Pet rats can be killed by this product just as easily as wild rats. Other domestic rodents such as hamsters and gerbils can also be killed, so make sure they can’t get anywhere near the bait.

Any bait for rats and mice can only be effective if they actually consume it. That’s why it’s important to deploy RatX pellets in places where you’ve seen rodent activity. Put pellets down in runways, near holes the rodents use, or even directly into the holes. Rats and mice are lazy, and the closer the food source is to their home, the more likely they are to eat it.

RatX becomes ineffective if it gets wet. For that reason, it’s recommended you scoop 1.5-2 ounces (40 to 60 g) of pellets into a plastic bag to deal with rats.

For mice, you can use 1/3 of an ounce (10g). The plastic bag helps to keep the pellets dry. Rats and mice will chew right through the plastic, so don’t worry about it getting in their way.

Place the bait near rat holes and runways. Rats and mice like to run along walls, so these are good areas to use the bait. Keep adding fresh bait to areas where you’ve seen evidence of rodents feeding. You want to make sure they get a full dose, so keep adding bait until there’s no more sign of rats.

Make sure that you remove any competing food sources. The less rats and mice have to eat, the quicker they will find and consume the RatX pellets.

Get rid of garbage, clean up your house, remove fruit and nuts from trees, and get rid of birdfeeders. All of these provide good food sources for rodents and make them less likely to depend on the bait.

Rats and mice can be surprisingly picky eaters. The biggest downside of RatX pellets is one they share with all rat baits – if the rodents don’t eat the poison, it cannot be effective. That’s why it’s so important to get rid of other food sources.

For truly effective rodent control, it’s a good idea to combine multiple methods. As well as deploying RatX pellets or any other rat bait, you could also use traps to catch rats and mice. That way, even if they’re not attracted to the bait, you can still get rid of rodents.