Menu
Menu
The Verdict
The Mosquito Magnet is a great option for controlling mosquitoes over a wide property, but the relatively frequent maintenance and sizable upfront investment means it's not for everyone.
Efficacy
9.5
Ease of Use
5
Safety
8
Value
5.4
The Good
Mosquito control that works
The Bad
Need to replace the propane and Octenol regularly
Expensive initial cost
Not a pretty looking device
7
Bug Lord Rating
Amazon

This article covers what the Mosquito Magnet is, how it works, how effective it is, and everything else you could want to know about how to use and maintain the device! 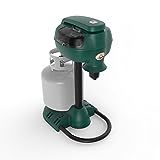 What is the Mosquito Magnet?

Mosquitos have evolved for millions of years to hone in on their prey, suck their blood, and reproduce. In order to find a human, mosquitos search the environment for signs that humans are close. They smell the air for signs of carbon dioxide (CO2) – which humans are actively breathing out in large quantities. Once they get closer, they start to hunt for the smell of human skin.

How the Mosquito Magnet Works

The Mosquito Magnet uses propane to create carbon dioxide through the process of controlled combustion. While there is no open flame, an electronic device combusts the propane, releasing a steady stream of carbon dioxide. As the carbon dioxide leaves the unit, it passes over the secondary attractant – octenol.

The Mosquito Magnet blows this mixture of carbon dioxide and octenol out of a central nozzle. At the same time, a powerful suction is created in a ring that sits around the output nozzle. This system – known as counterflow technology – puts the suction as close as possible to the attractant. Compared to regular methods of light and carbon dioxide attractants, counterflow technology is much better at capturing mosquitos and other biting insects.

Once the insects are sucked into the Mosquito Magnet they are deposited in a small net, where they slowly dehydrate and die. After about 24 hours, the mosquitos can be discarded into a trash can. Simply replace the net and the device will continue to catch more mosquitos, slowly reducing the overall population.

One thing to note is that the Mosquito Magnet Patriot Plus model does require an electrical outlet to operate. For most homeowners this will mean running an extension cord through the lawn, though it does come with a 50-foot power cord as well. The more expensive Executive model has a rechargeable battery that can be used in place of the power cord.

Does the Mosquito Magnet Work?

So, you may want to keep the DEET handy for a month or so as the Mosquito Magnet slowly reduces the population of mosquitos in your area. Wearing a mosquito repellent will help drive mosquitos to the trap and help reduce the population faster.

The Mosquito Magnet is a form of population control – it intends to capture a large majority of mosquitos in a given area to stop them from reproducing. Over time, this leads to the extinction of the immediate mosquito population. The website claims that a single Mosquito Magnet unit can cover up to 1 acre of property! Studies have shown that the Mosquito Magnet is very effective at capturing mosquitoes, more so than most alternatives.

The Mosquito Magnet also attracts other flying insects that bite, such as black flies, biting midges, “no-see-ums”, and many other insect species!

Given that most mosquitos typically only travel around 50 meters, the Mosquito Magnet should be placed as close as possible to mosquito breeding grounds. Mosquitos lay their eggs in standing water, small ponds, and even temporary puddles. By placing the Mosquito Magnet between the breeding area and the area you want to protect you can effectively limit the number of mosquitos that make it to your house or backyard.

In general, the Mosquito Magnet has few limitations. It is intended to be run constantly during mosquito season, which depending on your location could start anywhere from February in the Southern US to early May in the Northern US.

Both the Octenol and propane tank should be replaced every 21 days. The Mosquito Magnet will still operate without replacing the Octenol, but you’ll find the catch rate significantly diminishes.

The main limitation of the Mosquito Magnet is that it does not provide immediate protection from large swarms of mosquitos. The trap takes time to attract and collect mosquitos, so unlike a repellent, it will not protect you immediately. They estimate 7-10 days to really knock down the population.

Mosquito Magnet can use two different forms of attractant: octenol and R-octenol. There is only a slight chemical difference between these substances. Octenol is a synthetic attractant designed to mimic the smells of human skin. Scientific studies have shown that octenol significantly increases the number of mosquitos a Mosquito Magnet can catch.

In the lab, two forms of octenol are produced – S-octenol and R-octenol. These molecules share the exact same chemical formula, but they are constructed kind of like hands – one is the left hand and one is the right hand.

The “standard” octenol packs contain both S- and R-octenol. In nature, only R-octenol is produced. This makes the standard octenol slightly less effective because mosquitos are only really attracted to R-octenol.

Mosquito Magnet does offer a slightly more expensive attractant that contains only R-octenol. The R-octenol packets supposedly last 40% longer than the standard octenol and should be more effective at capturing mosquitos, making it better bang for your buck.

The company suggests that in northern, temperate regions like Canada, the regular octenol should be sufficient. For those in the United States, R-octenol will be more effective.

Patriot Plus vs Executive Models

The Mosquito Magnet currently comes in two different models – The Patriot Plus and the Executive. Both models cover up to 1-acre of property and have all the same attractants and capture devices. The Executive model costs roughly twice as much as the Patriot Plus and includes several features that might be desirable.

The Patriot Plus comes with a standard A/C plug, which can be plugged into an outside outlet. By contrast, the Executive comes with a rechargeable battery – so it can be deployed anywhere on your property without running power.

The Executive also has a much larger collection net, so you won’t have to empty the trap as regularly. Plus, it comes with a wheeled base to help you easily move it around, an LCD panel to quickly view and change your options, and fuel-saving technology to help you propane and attractant last even longer. 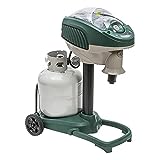 Some people may be concerned that releasing large amounts of carbon dioxide into the air can accelerate global warming. While it’s a valid concern, the Mosquito Magnet releases only a fraction of the carbon dioxide that other activities release – such as driving a car. In fact, if you calculate the amount of propane in a propane tank and convert that into carbon dioxide, it’s around 24 kilograms of carbon dioxide.

If you were to operate the Mosquito Magnet year-round and replace the propane tank 12 to 15 times it would release a maximum of 367 kg of carbon dioxide per year. Driving a car, on average, releases nearly 4.6 metric tons of carbon dioxide into the air – or 4,600 kg.

So, the Mosquito Magnet – if used year-round and constantly – releases about 8% of the carbon dioxide released by a car. Since most regions will only be operating their Mosquito Magnet for ~6 months, you should expect that number to be cut in half.

The Mosquito Magnet will collect some “off-target” species of non-biting flies and insects. While the environmental impact of this side-catch has not been specifically evaluated, it is unlikely that it can cause significant environmental damage. The device does not seem to attract or harm pollinators – such as bees and butterflies – so other wildlife in your backyard should not be harmed.

Propane, the source of CO2 for the Mosquito Magnet, must be replaced every time the tank is empty. A single propane tank can last for up to 21 days of continuous operation. Propane costs are typically around $15-20 for a tank refill.

The R-octenol packs are supposed to last 40% longer than standard octenol and may be able to attract mosquitos better. R-octenol supposedly works better in areas with lots of mosquitos, whereas octenol will suffice in more temperate regions. Octenol packets should last about 21 days, while the R-octenol packs will last closer to 30 days. 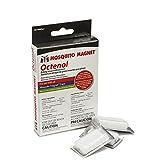 The mosquito net should not need replacing during the life of the Mosquito Magnet but you will need to clean it out on a regular basis. The mosquito net traps the mosquitos, where they slowly dehydrate. Once the net is full, no more mosquitos can fit into the trap and the catch rate will drop or the machine will become clogged with dead mosquitos.

How often you have to empty and clean the net depends entirely on the number of mosquitos in your area. If you have a massive swarm you are dealing with, you may have to clean out the net every day. On the other hand, in an area with very few mosquitos you might only have to clean out the net once a month when you service the propane and attractant.