Dealing with an ant infestation in your home can be difficult to live through. These little black bugs seem to keep popping up no matter how many you kill. What’s worse is the feeling of finding one crawling on you! If you’re like me, you’ll be feeling phantom ants crawling on you the rest of the day.

First we’ll try to identify what kind of ant you’re dealing with and then give you the steps you need to treat the infestation.

What Kind of Ants Do You Have?

Identifying the exact kind of ant species you’re dealing with can be difficult, but isn’t entirely necessary in order to control the outbreak. Still, it can be useful to know what you’re up against.

You’ll likely be able to find ants where ever there is water or food for them in your home. Ants are typically pretty bold and don’t look to stay hidden like bed bugs do.

Steps to Get Rid of House Ants

Whether you’re dealing with multiple colonies of ants or just one, the steps to getting them out of your house remains largely the same.

Often times this isn’t possible, but if you’re able to follow a trail of ants back to their nest this could give you a good head start on controlling the outbreak. Be sure to look around the outside of your home as well for any clues as to how the ants got into your house in the first place.

It’s also possible that the main colony exists outside of your home which would also be useful to know.

If ants are in your house, it’s because they’re finding food and/or water that they need to survive. Eliminating these from your home won’t immediately kill off the ants you have, but it will help with preventing future infestations and hopefully prevent more colonies from forming in your home.

If you find ants feeding from these areas, you need to take care to fix the underlying issue.

You may need to vacuum more often, which is a good thing to do during any sort of bug infestation. If you find ants attacking items in your pantry, you should wipe up any spilled food sources and consider buying some sealed plastic containers for items like sugar.

Storing dog or cat food in a plastic pet food container is also a good strategy to keep ants from feeding on bags of pet food.

This is the most vital step of controlling an ant colony and the one that people most often get wrong.

When you’re dealing with an ant colony in your home, you do NOT want to go spraying an ant killer spray or ant repellent at every ant you see.

If an ant colony feels it’s under attack, it will fracture into separate colonies so it has better odds at survival. If you start randomly killing the worker ants out foraging, you’re not taking care of the root of the problem which is the queen ant back in the colony’s nest.

This may spread your ant infestation into new areas of your home and you end up with more ants that you started with! For this reason, you should never resort to ant killing sprays such as the ones Raid makes inside of your home.

Instead, you need to use an ant bait. An ant bait is basically a product you purposefully put out for the ants to come and forage. The product doesn’t immediately kill them, it tricks them into thinking they found a great source of sugary nutrients. I recommend using Optigard Ant Bait gel seen below.

I prefer to use an ant bait gel. These products allow you to control how much bait you put out at once and are extremely effective at killing ants.

Here are some important things to remember about putting out ant bait.

Another thing to keep in mind – if you have multiple colonies in your home, you need multiple bait stations. Some people apply bait in their kitchen and think that’s going to kill the ants in their upstairs bathroom. If the ants taking the bait in the kitchen aren’t in the same colony as those upstairs, then you’re still going to have ants!

Many people don’t understand this and think that ant bait doesn’t work because eventually the ants spread back to the kitchen. This can lead to a harmful cycle of trying other products which fragments the colonies further and you end up in a bigger mess than you started.

I recommend baiting around any hotbeds of ant activity and sources of food/water you found.

After the ants start taking the bait, it’s a good time to apply a residual dust insecticide. An insecticide dust such as CimeXa is non-repellent so it shouldn’t cause the ant colony to fragment. It kills bugs over the course of 24-72 hours, so it will still let ants move about to carry the bait back to the colony.

What’s really cool about CimeXa is the dust sticks to the bugs and they end up bringing it back into their nest where it will stick to other bugs as they crawl about, helping to kill much of the ant population.

You should apply the dust into any voids or crevices in you walls, under appliances, behind outlet covers, any place you suspect the ants may be hiding or may move about in the future. CimeXa has an effective life of at least 10 years, so it will be very helpful in preventing future infestations as well.

This may be the final step, but it’s the most important step for preventing future ant infestations.

Ants got into your home somehow. If you can find where their point of access was and seal it up, you can stop ants from coming back.

If your home is brick, look for holes in the mortar where ants could be entering. Also look for cracks around your windows and seal them with caulk. Many times winged black ants find their ways into homes from being attracted to the lights inside at night.

If you have vegetation around your house, trim it back at least one foot from your home’s exterior. Ants commonly crawl on trees or bushes and can use that as an bridge to your home.

Once you have the vegetation under control and sealed what you can, it’s time to apply an exterior protection. I recommend using LambdaStar UltraCap. 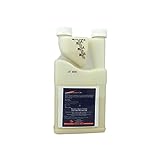 This product can be mixed in a gallon sprayer and applied on the exterior of your home. It’s recommended to be applied in the following places –

If you happen to be baiting ants in these areas, don’t apply the product there as it kills ants quickly. You may need to reapply this product every 3 months or so for maximum efficiency.

This product is effective against just about any kind of insect you can name such as spiders, roaches, carpenter bees, centipedes, and termites to name a few.

You may also want to invest in a bug zapper for the exterior of your home. As I’ll soon discuss, black ants have wings during mating season and are attracted to lights during night time.

How to Remove Ants FAQ

Do black house ants have wings?

Yes and no. During the mating season of late May through July, some black house ants grow wings and can be found “swarming”. Some people mistake swarming, winged ants for other bugs such as gnats or mosquitoes. If you have ants swarming in your house, you’ll soon have new colonies forming which means you need to move fast to control the population.

Do house ants bite or sting?

Most every species of house ants do not have the ability to bite or sting humans or pets in your home. They’re more of a nuisance than a health concern.

Will ants leave my home on their own?

It’s possible an ant colony moves out on their own but very unlikely. If they have a colony in your house it’s because they have sources of water and food nearby. Theoretically if you were to remove all sources of nutrients they may need to move, but it’s also possible they find food and water outside your home and bring it back inside.

Can ants swim/survive in water?

Ants aren’t really swimmers, but they float pretty well since their exoskeleton repels water. Simply putting them in water wouldn’t kill them quickly and isn’t a method of ant control.

Ants will eat many different foods such as other insects and even their own wings after they fall off, but above all else they prefer sugary foods. This is why baked goods and lot of the processed snacks humans eat are so attractive to ants. Many ant baits use a sugary mixture for this reason.

I only see ants outside my house so far. Should I be concerned?

Yes, you should probably try baiting the ant colony and after a few days treat the foundation of your house with an ant killing product as discussed in step 5. The ants may already be inside your home and you just don’t know it yet.