The red imported fire ant (sometimes abbreviated RIFA) is a devilish pest from the floodplains of South America. In the 1930s, these invasive ants began stowing away on trade ships and have since become a scourge throughout the entire world; fire ants are now a pestilence to people in Australia, the southern United States, and countries throughout Asia and the Caribbean. And like an unwanted house guest, these tourists have proved tricky to remove — the species’s Latin name, Solenopsis invicta, means “invincible.”

Luckily for all of us who have to put up with fire ants, invincible is a bit of an exaggeration — but not by much. The fire ant is a productive and especially fecund species, capable of inhabiting many environments and achieving rapid exponential growth. But by following good practices of identification, mound treatment, and preventative action, you can rid your property of imported fire ants and do your part to combat these invasive pests.

Fire ants are tiny, ranging from a tenth of an inch (2mm) to a quarter of an inch (6mm) in length. This variance is seen between workers within a single nest, making the species polymorphic (meaning multiple forms exist within a single population). Should you need to make the distinction, smaller fire ants are called minor workers and their beefier siblings are called major workers or soldiers.

Regardless of their caste, fire ants have a light reddish brown to dark brown color, and their abdomens are darker than their heads and bodies. The workers also have a defining sting apparatus, and you’ll know when they sting you why they’re called fire ants. Unless you’re a fan of painful burning sensations and nasty welts, it’s best to identify these pests from afar.

Differences among other types of ants

In addition to the painful stings that give fire ants their name, the species has a number of attributes that makes it an especially detested pest. Fire ants like to swarm aggressively, reproduce rapidly, and occasionally kill small domestic animals like calves and pigs by repeatedly stinging them.

Furthermore, fire ants are uncommonly productive and passionate about colony growth. A single colony can produce 4,500 queens a year, each of which can go on to lay 5,000 eggs a day for the next 5-7 years. Once mated, queens can fly far and wide, hitch a ride on flowing water, and even work together to establish new colonies (a practice called pleometrosis).

If all that isn’t bad enough, fire ants have a special filter in their digestive system that renders them unaffected by common bacteria used to kill other insect pests. Treating fire ant mounds thus requires special, highly lethal chemicals.

The best way to identify fire ants is by their characteristic nest mounds, which the ants prefer to build in open areas with good sun exposure: lawns, pastures, roadsides, and the like. Under the right soil conditions, these mounds can reach over three feet tall and three feet wide at the base. But the ants won’t always make it quite that easy to find them: their mounds often take irregular shapes, have no obvious entry or exit holes, and can sometimes appear as nothing more than flattened patches of disturbed soil.

Though fire ants prefer open areas, their nests can also be found near or under objects on the ground like logs, stones, or potted plants.

Be careful, though, if you’re examining a potential mound: fire ants are especially aggressive near their nests, and may choose to swarm you by the dozen. This situation may quickly go from bad to worse, as they tend to all sting together at once — and they’ll sting twice and a third time, too. As the Queensland government warns: “multiple stings give the sensation that the body is on fire.” This sensation can last for up to an hour, and the painful welts will last much longer. If you’re really unlucky, you may experience a severe allergic reaction (anaphylaxis) and require medical attention.

Killing fire ant colonies can be a very frustrating experience, but with the proper tools you can efficiently get rid of an entire fire ant infestation just like the pros. There are a few different types of products and application methods, so I recommend using a multi-faceted approach with both powder baits and broadcast granules. Here’s more details on each type and our preferred product to use.

Powder bait is the most common and effective way to control fire ant mounds. Proper bait requires a lethal formula to account for the species’ resilience and population density, and is applied simply by spreading a small amount 3 to 4 feet around the base of each mound.

We recommend Ortho Orthene Fire Ant Killer, a fast acting mound treatment that kills queens and starts destroying mounds within minutes. A 12 oz. bottle will treat up to 54 mounds, and requires no additional applications or watering in to be effective. The bait is best applied when fire ants are active, and is most successful when used in conjunction with a granule bait.

We also recommend Advion Fire Ant Bait as more of a professional option or if you’re dealing with a large infestation. This fast acting insecticide is designed to kill resilient pests like RIFAs as well as bigheaded ants, pavement ants, and turfgrass ants. Advion’s formula is effective on all life stages of ants as either a broadcast or mound treatment, and ensures colony control within just 24-72 hours.

Granule bait is a more general method for controlling fire ant mounds. Unlike powder bait, which is applied around the base of individual mounds, granule bait is used to treat entire lawns. Granule bait also differs from powder bait in that it must be watered in to work, which means exactly what it sounds like: whenever the granules get wet, they release a little bit more poison. This is useful for ensuring the granules remain effective over a long period of time.

We recommend Ortho Fire Ant Killer Broadcast Granules, which you can apply to your lawn seasonally or after treating individual mounds with powder bait. This 11.5 pound package can treat up to 5,000 square feet of lawn to protect against fire ants for 6 months. For year long control, Ortho recommends applying granules in spring or late summer.

Liquid insecticides generally come in a concentrated form and must be diluted with water before being applied. These are generally more effective as topical remedies for specific nests, which can be dealt with using a technique known as mound drenching. Typically, these insecticides work on a wide array of pests including ticks, fleas, spiders, mosquitoes, and many more.

In order to treat fire ants, we recommend using a large rod to form a vertical hole within a mound, allowing a deep opening so more of the liquid can fill into the tunnels. If you go with the liquid approach, I recommend Talstar (also our choice for spiders). Please note: you will need a gallon garden sprayer in order to apply this pesticide. 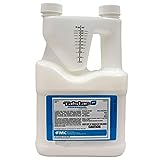 Broadcast baiting is the practice of spreading bait evenly around a lawn (as with preventative granule bait) or mound (as with powder bait that targets a specific nest). In either case, worker ants confuse the bait for tasty food, which they bring to their queen in an unknowing act of regicide. With the queen dead, the workers are unable to survive, and the mound dies grieving for its fallen leader.

Broadcasting bait is often done with the help of a broadcast spreader, a hand-held or hand-pushed tool that helps cast the bait (or seeds, or fertilizer, or whatever else) evenly around a lawn.

Preventing fire ants from colonizing your property is easier than eradicating them, and the best way to be proactive about colonization is to broadcast both granule bait and powder bait as needed.

One effective way to apply insecticide to a fire ant nest is simply to soak it; this method is appropriately dubbed the mound drench. If enough water is poured around the entire surface of the mound — mixed with the appropriate ratio of liquid insecticide — the solution should make its way to the queen for a quick, easy kill.

As always: remember to be cautious when approaching a nest, lest you raise the ire of the fire ants within before drenching their mound.

If the worst happens and a colony of fire ants has made its way into your home, all is not lost. In addition to treating the mounds as normal outside your property, you can buy specific baits formulated for indoor use. If there are just a few ants foraging in your home, you can spray them directly with a contact insecticide.

If you discover the ants are nesting somewhere in your house, the situation may be more complicated. You should consider talking to a professional exterminator for advice, as a higher-strength contact insecticide may need to be applied.

Fire ants are an aggressive, remarkably persistent pest that wreak havoc on agricultural operations, natural ecosystems, and quality of life all over the world. RIFAs have made their way to at least 15 states in the US, and the costs of dealing with them — mitigating damage, controlling their spread — runs up to $500 million per year in Texas alone. Homeowners spend another $8 million each year just on medical treatments due to fire ant stings.

Needless to say, you’d do well to avoid them.

To do so, make sure your property is sealed tight: don’t let tiny cracks in your foundation or openings by your doors and windows get taken as an invitation. If you can, install weep hole covers with an aperture no greater than 0.5 millimeters (about 0.02 inches).

Because fire ants nest in soil around structural foundations, it’s easy for them to stumble onto an HVAC system or air conditioning unit that grants them access to your home. To mitigate risk, it’s important to regularly check around your property for nest mounds and address fire ant activity before it can become a bigger issue.

Finally, the most effective preventative measure for fire ants is to broadcast bait seasonally and to apply insecticide promptly to any mounds you see. It’s also a good idea to keep a close eye on any new plants, shrubs, mulch, or trees you introduce to your land, as the soil may be harboring tiny, stinger-happy fugitives. Don’t let your property become the next place fire ants invade!

Get the best pest control guides straight into your inbox!