For many people, bed bugs are the stuff of nightmares. Members of the insect family Cimicidae, these night-crawling insects hide in cracks and crevices in your home during the day, then come out at night to feed on human blood. Bedbug bites are itchy, red, and painful. Further, the very idea of bed bugs is disgusting and terrifying, meaning a bedbug problem isn’t just a physical inconvenience – it can be an emotional ordeal.

Bed bugs – literally – suck. It’s hard to sleep tight when the bed bugs are biting. Worse still, bed bugs don’t just live in beds. Bed bugs are travelers at heart, so they like to spread. Bed bugs can live in all sorts of places including clothes, furniture, luggage, and yes, your car.

Thankfully, bed bugs infestations in cars are not too common. Bed bugs would prefer to live inside your home near your bed where they have hours to get to you to feed at night.

But if you are reading this article, you may already be experiencing this problem! We are here to help you. This article will guide you through confirming you have bed bugs in your car and picking the best options for killing them so you can move on with your life.

How to Check if You Have Bed Bugs in Your Car 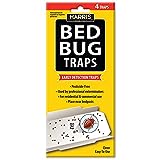 The Best Way to Kill Bed Bugs in a Car…

There is a lot of great advice available online about how to kill bed bugs once you know you have them in your home, but when your fighting them in your car you should use different weapons.

The best method to kill bed bugs in a car is Nuvan strips. The genius of Nuvan strips for killing bed bugs in the car is that they work by emitting a vapor into a closed space that kills bed bugs quickly. Let’s dig into the details and tell you how you can use Nuvan strips safely.

How do Nuvan Strips Work?

A Nuvan strip is only effective when it’s placed in an enclosed, mostly sealed space that isn’t going to be occupied by humans which is why they’re commonly recommended for indoor use. They can be placed in a closet or a closet, but for cars it’s much easier and more effective. Just put the strip into the plastic hanger and hang the strip in your car. The strip will kill all pests in 48-72 hours.

There are also a few important steps for post-treatment. First, remove the strip from your car. Easy enough, but it’s the sort of thing that’s easy to forget and you would not want to be driving in your enclosed car with residual pesticides in the air.

Next, air the car out for a few hours, or even a whole day if possible. Finally, you may have to treat again in 1-2 weeks. Nuvan strips only kill live, hatched insects. The strips do not kill eggs. In order to kill eggs, multiple treatments are required, or a single, longer treatment of up to two weeks will work.

Nuvan strips are effective for up to 4 months, so you can place the strip back into a sealed plastic bag and break it out later if needed within that 4 month timeframe.

Other Methods for Getting Rid of Bed Bugs in a Car

Some people may not be keen to use pesticides in the car, but not to worry – there are other, non-pesticidal options for killing bed bugs in the car.

Bed bugs can’t take the heat. They don’t survive at temperatures above 119 °F (125 °F for eggs). Steamers are our preferred method of do-it-yourself heat treatment for bedbugs. They work by blasting steam into cracks and crevices in your car.

For best results, bed bugs need to be heated to the above temperatures for at least 30 minutes, preferably for up to three hours (though this length may be difficult with a personal steamer). The most important features of a good steamer for bed bugs are high heat output (to make sure that the steamer actually kills the insects) and steam pressure (to make sure the steamer penetrates deep enough to reach every insect and egg).

Bed bugs may also be able to be heat-treated by the sun, but this depends on factors like the temperature where you live, whether you have tinted windows, and the weather. The inside of a car parked in the sun with the windows up on a hot day (80 °F to 100 °F) can get as hot as 130 °F to 172 °F. This is more than hot enough to kill bedbugs and eggs.

Diatomaceous earth has the benefit of being a very safe and natural treatment for bed bugs compared to pesticides. Diatomaceous earth is made from the remains of diatoms, ancient, fossilized, single-celled algae. The silica that forms the cell walls of diatoms has ended up in deposits on riverbeds, where it is mined and ground to make diatomaceous earth.

Diatomaceous earth works so well as a pest control agent (not just for bed bugs!) because it absorbs lipids (which form the waxy outer layer of insect exoskeletons). This waxy layer is what keeps water from evaporating out of the insect, so when insects are exposed to diatomaceous earth they dry out and die over time. Diatomaceous earth is also sharp and jagged at the microscopic level, which further batters and damages the insect’s exoskeleton.

Diatomaceous earth can be sprinkled into floorboards and crevices in the car, or applied by a powder duster for larger spaces. It can be left as-is for as long as you choose, since it does not lose effectiveness over time. Vacuums can’t always reach the types of crevices what diatomaceous earth settles in, so there is generally some earth remaining after vacuuming for longer-term prevention.

Take care when vacuuming diatomaceous earth, since it is a very fine powder that can damage vacuum motors. Using a wet/dry vacuum or one with a HEPA filter is safest.

For a serious infestation, frequent vacuuming alone is unlikely to be enough to kill all bed bugs and eggs. However, for a smaller infestation in a car, vacuuming stands a better chance.

Frequent vacuuming is also an important final step in every treatment for bedbugs for the sake of hygiene (walking on carpet full of dead bugs is almost as gross as if they were alive).

How Did Bed Bugs Get in Your Car?

Car infestations by bed bugs are not as frequent as infestations in homes and furniture, but they do occur, and they can indicate an infestation elsewhere you haven’t noticed. The most likely way a bed bug would end up in your car is by traveling on a person or on personal objects like clothing or luggage, so if you’ve had an infestation in your car, check your home as well.

You should also talk to anybody who has been in your car recently to warn them so they can remain vigilant themselves. Bed bugs can be very difficult to treat the longer they go unnoticed, so prevention and keeping track of infestation sources is very important.