Overnight, a small mound of dirt and small stones appears out of nowhere on your sidewalk. Ants are racing to and from the hill, hurriedly bringing as much food into the colony as possible and defending their territory. Depending on what type of ants they are, you may have a serious problem on your hands or you may just need a broom to sweep up the loose dirt.

This article discusses everything you need to know about how to remove ant hills, with specifics for different types of ants!

What is an Ant Hill?

An ant hill is an entrance to an ant colony, though it serves many more functions than just being the front door. Ant hills are specifically designed by ants to keep water out, keep the colony at the right temperature, and help ants defend against predators. Ant hills vary in size, shape, and structure depending on the species of ant that built the hill.

Ant hills can be constructed from many different materials, depending on the species of ant and the environment it lives in. Ants that live in dense forests tend to build anthills out of pine needles and other fallen plant materials. Desert ants tend to have fewer construction materials, tending to use only the dirt and rocks they have excavated from their colony. You may even find some anthills coming straight up out of cracks in concrete, representing the excavations happening below.

Ant hills, also known as ant mounds, can be deceiving. The size of a mound does not begin to capture the size of the colony below. Even with only one, seemingly small entrance, an ant colony can house hundreds of thousands of ants.

How Deep Can an Ant Hill Go?

Ant colonies vary widely in total size and depth depending on the species involved. A Japanese ant holds the record for the deepest ant colony at over 4 meters (over 13 feet) deep! The Florida harvester ant holds the record in the United States, with a nest that tops out at 3 meters (about 10 feet).

Imported Red Fire Ants can also excavate a nest that is around 10 feet deep, depending on the soil type. Interestingly, smaller ants tend to make deeper nests – enabled by their smaller size and the smaller tunnels they require.

There are around 10,000 different species of ant – and most of these ants create anthills as a surface feature marking the entrance to their underground colony. Some ants only form temporary colonies, or regularly move throughout an ecosystem.

Other ants, such as carpenter ants, create colonies in plants and therefore do not create anthills. But, most ants tend to pick 1 location and establish a long-lived colony in that location. Some colonies of ants have survived in the same location for nearly 20 years.

In fact, most ant species can be identified by the structure and size of their anthill! Plus, some anthills signify a single entrance to a single colony, while other anthills are simply one entrance of many.

For example, Argentine ants are famous for building supercolonies – hundreds to thousands of miles of interconnected ant colonies that recognize each other as a society (one nearly as large as human society). These interconnected colonies would be almost impossible to eradicate.

Luckily, most pest ants tend to establish individual colonies. The invasive red fire ant, for instance, tends to build a single, large mound above a colony that is fairly linear. The entrance to the mound typically does not have a clear center, and the actual tunnels can be hard to identify in the fluffy, loose soil these ants use to create the mound. This makes a red fire ant mound easier to identify and eliminate than other types of colonies.

Getting Rid of an Anthill

The key to eliminating any ant colony is to destroy the queen. You could kill a million ants, but if you miss the queen the colony is likely to make a comeback. On the other hand, if you only managed to kill one ant and it was the queen, the colony would quickly die off on its own.

However, this is easier said than done.

One of the most surefire methods for eliminating a fire ant colony is to use appropriate ant bait. Ant baits are usually formulated for specific species (this link is specifically for fire ants). The ants eat the bait granules and carry the bait through the colony to feed other ants, the queen, and growing larvae. 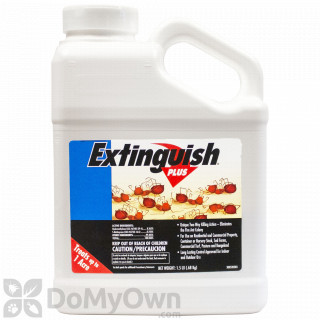 Extinguish Plus Fire Ant Bait is highly attractive to fire ants and combines the knock down of an adulticide (hydramethylnon) and the long-lasting control of an insect growth regulator (IGR) (s-methoprene).

All you need for a large mound are a few tablespoons of granules, placed on or near the ant mound. The ants will do the rest of the work, eliminating entire colonies in only a few weeks.

If you are treating a large area, you can also broadcast the granules over entire acreages, killing any colonies that happen to pick up the bait. If you only have 1 ant colony, you may want to consider a different method or a smaller package of bait.

Ants construct their mounds to deal with large amounts of water. This is why flooding an ant hill with a garden hose rarely (if ever) eliminates the colony. However, a technique called “drenching the mound” uses water to carry potent insecticides into the mound. By mixing an insecticide with water, it can be forcibly pumped into a mound – drenching the entire colony and the soil around it.

This method works particularly well in moist soils that will readily take in water and spread it through the colony. Dry soils must be irrigated first to prepare them for an insecticide. Keep in mind that only specially formulated insecticides work as a drench, you can’t simply mix any chemical with water and dump it into a mound.

Always follow the label on your pesticide, but one example of how this method could be done is by mixing 1 ounce of Talstar into 1-2 gallons of water, then drenching the mound itself as well as in a 3 foot radius of the mound. 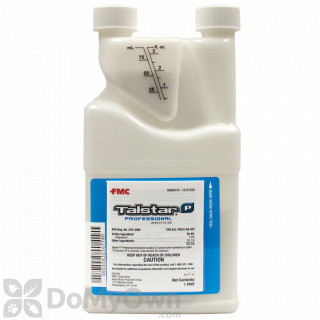 Multi-Insecticide with bifenthrin is one of the most trusted and widely-used insecticides by pest control professionals today, and now available to you for DIY pest control.

Believe it or not, there is an “all natural” method to ant control that is fairly simple to carry out (though it does have a lower success rate than insecticides). Ants are arthropods. Like lobsters and crabs, they don’t survive long in boiling water. In order to eliminate an entire ant colony, you’ll need 3 or more gallons of boiling water.

If you are dealing with aggressive fire ants, be sure to wear protective clothing and try to be as quick as possible. If the queen is not too deep, this method can work well. You should be able to check on the colony a day or so after the treatment to see if it was a success!

Note that this method does have its dangers and I would not recommend it. Transporting 3 gallons of boiling water and pouring it in a controlled manner without spilling on yourself or burning yourself in the process is a heavy task.

Will Bleach, Vinegar, or Gasoline/Fire Kill an Anthill?

Technically, yes. In certain concentrations, both bleach and vinegar can technically kill ants. Ignited gasoline will certainly kill an ant. But, bleach will permanently kill all the vegetation in an area, vinegar will acidify the soil, and gasoline treatments will almost certainly lead to burns and explosions that will cause serious physical and property damage. So, these methods are definitely not advised.

As a side-note, entomologists study ant hills by pouring plaster, concrete, or even molten-aluminum into the anthill. As any of these structures hardens, it becomes a perfect replica of the tunnels the ants have built. While this is typically done after the ants have left the colony to avoid killing ants, some people in areas with invasive fire ants have turned it into a form of ant control that doubles as art!

What Do I Do if I have Multiple Anthills?

First, try to ascertain whether the multiple anthills represent different colonies, or even different species. Some species are totally innocuous if a little annoying. These species can mostly be ignored unless they are established in an inconvenient spot. If you have many ant hills from an aggressive or harmful species, you should try to treat all of them at the same time.

Ant bait stations, granules, broadcast sprays, and drenches can help you complete your task. If you only have a few anthills, try the drenching method. If you are dealing with acres and acres of ant-infested land, try insecticide granules. When ants are actively foraging, it only takes a few granules to take down an entire colony.

How Can I Prevent Future Ant Hills from Forming?

The best way to prevent ant hills and ant colonies from establishing a foothold on your property is to treat early and often. Some people let their ant infestation get so strong that they even start finding ants in their car!

Ants typically overwinter in their colony. In the spring, ants will venture out to forage. Some species will swarm to find a new colony location, while other species have wings to help them disperse.

Insecticide granules, sprays, and ant bait stations should be ready for these first voyagers. This should stop the colony before it gets established.

However, even if you are later in the season you can still prevent a future spread by treating the ants you have. Remember that ants are mostly dormant in the winter and late fall. Since they don’t eat much, it’s much harder to treat these colonies. Wait until the colony becomes active again in the early spring and treatment will be a breeze!