Menu
Menu
The Verdict
First Saturday Lime is overpriced for the main ingredient essentially being chalk, and the pest-repelling claims are not well studied. We suggest skipping this product or using a cheaper alternative.
Efficacy
2.5
Ease of Use
10
Safety
9.5
Value
0.5
The Good
Easy to use
The Bad
Very expensive for what it contains
No real proof or studies on the effectiveness of repelling pests
Loses efficacy outdoors with moisture and rain
5.6
Bug Lord Rating
Amazon

As seen on Shark Tank, First Saturday Lime claims to be an “eco-friendly” product safe for children, pets animals, and organic farming. While the business model was attractive enough for one of the sharks to take a bite – the concept of using calcium carbonate and other desiccants to repel insects has been around for some time.

Keep reading for everything you need to know about First Saturday Lime in our review – including our breakdown of how it works and if it is worth the price! 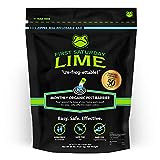 What is First Saturday Lime?

A pesticide actually kills pests or inhibits their reproductive cycle, whereas a repellent simply tries to keep them out of specific areas. First Saturday Lime claims to be able to repel insects by creating an undesirable barrier of calcium carbonate to repel crawling insects.

Calcium carbonate is commonly used as an anti-acid and has many commercial applications ranging from whitewash to cleaning industrial smokestacks. The company adds in some amount of citric acid – another “home remedy” insect repellent – though the exact formula remains proprietary.

First Saturday Lime claims on their website that the product will repel:

However, as you will see in the section below, these claims have not been specifically verified by any published scientific studies.

How Is It Applied?

The company suggests that it’s product is reapplied once a month, hence the name “First Saturday”. Application basically involves spreading the product onto the ground to create a barrier that insects will avoid.

First Saturday Lime recommends many different types of applications on different areas of your property. Here’s a short breakdown of each type:

First Saturday Lime can also be used around your home and in your yard to repel many different insects. Essentially, you can simply pour the powder into a line around a building you want to protect or whitewash walls to discourage insects from laying eggs. While there are a handful of scientific studies that suggest this may work, few scientific studies have tested precipitated calcium carbonate specifically or the application methods the company suggests.

The company claims that the product is completely safe for your family and pets – though users should be warned that these claims are based entirely on anecdotal evidence and not on rigorous clinical studies. Calcium carbonate is recognized as “generally safe,” but high levels of ingestion can certainly disrupt the pH balance of the organism that ingests it.

First Saturday Lime offers many uses for chickens, from controlling moss growth and algae in water pans to getting healthier, harder eggs. First Saturday Lime claims that it makes a great dust bath for your chickens, and it can even be used to whitewash the inside of the chicken coop to repel insects.

The company also claims that its product is great for routine cleaning and deodorizing in horse stables. Similar to chickens, First Saturday Lime can be used to whitewash your horse stalls and keep the water trough clean.

How Does First Saturday Lime Work?

First Saturday Lime cited “years of story evidence” to back up all of their suggested uses – though the company does not provide any specific scientific evidence for these claims. Calcium carbonate has long been a “home remedy” for getting rid of insects, though there are few scientific studies that suggest it actually works as a repellent.

The company claims that calcium carbonate works because it is a desiccant. A desiccant, when applied directly to insects, pulls the water out of their bodies and effectively dries them out. The citric acid may add a pleasant smell and additional insect defense. Though the product may form a lethal barrier to insects, there is no scientific evidence to suggest that it repels them from a larger area.

So, it is likely that insects will avoid the areas with large amounts of the product but specific claims don’t seem to be validated by much scientific study. It also may not be very cost-effective.

Desiccants of all types are commonly used as “traditional” insecticides. In fact, the basis of First Saturday Lime is the anecdotal evidence that ants will not cross a line of chalk (also known as calcium carbonate, the main ingredient in First Saturday Lime.)

One article posted in a Japanese journal suggests a calcium carbonate mixture can deter a specific type of moth from laying eggs on apples when it is applied as a spray. However, this is not the application method suggested by First Saturday Lime, so the research may not translate to the First Saturday Lime product.

Interestingly, the National Lime Association does not list “insect repellent” as one of the known uses of precipitated calcium carbonate. The substance has been extensively used as a water treatment, as a soil amender, as a base for roads, and in many other applications. If calcium carbonate had been proven as an effective insect repellent, one would expect to find some evidence of this compiled by the industry that creates calcium carbonate.

What Happens if it Rains?

While citric acid and calcium carbonate may remain separate when they are in powdered form, they will most certainly react when they are introduced to water. This will create carbonic acid, which usually becomes carbon dioxide.

In layman’s terms – when it rains First Saturday Lime is going to wash away and become less effective. Some of it will turn into a gas, while some of it will wash into your soil and increase the pH.

What Are Some Useful First Saturday Lime Alternatives?

First Saturday Lime is essentially Barn Lime – a product that has been used for many decades to deodorize and clean farms, horse stalls, and barns. While the First Saturday Lime formula is a “company secret,” the company clearly states that calcium carbonate is the main ingredient. Barn lime is exponentially cheaper than First Saturday Lime and it’s the same active ingredient! You can usually get a much better deal on barn lime from a local home improvement store since bags are heavy to ship.

The calcium carbonate product clearly works to some level – it has been used in various industries for 100 years. First Saturday Lime is just rebranding the same product, adding citric acid, and selling it to people outside of the farming community at a massive price increase.

Hydrated lime – a product also derived from limestone though slightly different than calcium carbonate – has also been tested rigorously as a repellent. While it also has “anecdotal evidence” supporting its use, hydrated lime has failed against many insects, further adding to doubts that calcium carbonate is an effectively meaningful repellent.