No one wants to have pests, but some are worse than others. When it comes to pest species you may find sharing your house with you, bed bugs are one of the worst. These tiny parasites feed only on blood, and they prefer human blood to any other kind. To get that blood, they bite and leave you with itchy welts – that’s what makes them so annoying.

Bed bugs have been a fact of life for thousands of years. However, back in the mid-twentieth century, they almost vanished. They became so rare that many people lived their whole lives without ever encountering one. That all changed in the last few years of the 20th and the first few years of the 21st centuries. Bed bugs made an astonishing recovery worldwide, to the point that they have created a $650 million a year industry in the US alone.

With all this money devoted to bedbugs, it’s not surprising that people are forever trying to come up with new methods to treat them. The chemicals and heat treatments that are traditionally used to kill bed bugs can be expensive and take time to work.

If you just found a few bed bugs, you’re probably scrambling around your house for a remedy and have found yourself with a salt shaker asking yourself, “can salt kill bed bugs”?

Salt can be effective at killing creatures such as slugs by causing them to dry out. However, bed bugs are built differently. Their bodies are supported by a hard shell or exoskeleton made of chitin, the same material crab shells are made of.

Salt can’t get past this exoskeleton to dehydrate the bedbugs internally. Grains of salt are just too big to cause problems for bed bugs.

You may see online articles claiming that Epsom salts will kill bed bugs. Epsom salts, sometimes also called bath salts, dissolve more easily in water than table salt will. Therefore, some people think it may be more effective at dehydrating bedbugs. However, this is not the case – epsom salt will not kill bed bugs.

In fact, Epsom salts are not really salt at all but are a naturally occurring mineral combining magnesium and sulfate. Just like regular salt, Epsom salts won’t harm the chitinous exoskeleton of the bedbugs and therefore won’t dehydrate them.

Also, it’s important to remember that bedbugs only eat blood. Therefore they won’t consume the salt and be poisoned by it either.

You might think that dissolving salt and water would help to make it effective against bedbugs. It certainly makes it easier to apply to the places where bed bugs hide, such as seams along the mattress and cracks and crevices in your furniture. However, saltwater doesn’t harm bed bugs either!

Dissolving salt in water doesn’t make it any more effective at damaging the bedbug’s shell, which is what you need to do if you want to dehydrate them. Therefore, don’t rely on saltwater to solve your bedbug problems.

If salt doesn’t kill bedbugs, maybe you’re hoping it can help keep them away. Unfortunately, that’s not really true, either.

Bedbugs are attracted by the carbon dioxide we breathe out. Other smells don’t particularly interest them or repel them. They will live in both dirty and clean environments and aren’t much affected by the smell of salt or anything else.

There’s nothing special about salt that will drive bedbugs away. If you used enough of it, you could create a barrier that bedbugs would find difficult to cross. However, that’s true of any granular or dustlike material. When it comes to repelling or even killing bedbugs, there are far better options to kill bed bugs than salt available.

What Does Kill Bedbugs?

If you’re disappointed to find that salt isn’t an effective bed bug killer, don’t worry. There is a substance that can be used in the same way that is also great at killing bedbugs. 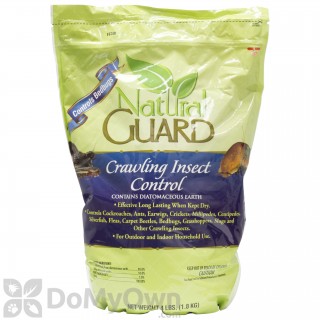 Natural Guard Crawling Insect Control containing 85% Diatomaceous Earth made from Amorphous DE fresh water type is a natural contact insecticide. Diatomaceous Earth dust works by causing abrasions on insects as they come into contact with product or ingest it.

Diatomaceous earth (also called “DE”) does this by piercing and cutting their hard exoskeletons. Diatomaceous earth comes in the form of a fine powder that appears soft and smooth, but viewed at a microscopic level, it is made up of tiny points and sharp edges.

It’s fine enough that bedbugs will crawl right over it, but it will scratch up their exoskeleton. This allows water to escape their body, causing the bed bugs to dehydrate and die. While salt crystals are too large to do this, diatomaceous earth’s structure is perfect for the job.

It’s important to note that diatomaceous earth does not repel bed bugs (when applied properly) and you don’t want it to. You want them to crawl over it and get scratched up by it so that they dehydrate. If the bed bugs avoid the DE and walk around it instead, that defeats the purpose of it!

The best way to use diatomaceous earth is as a perimeter treatment in a room where you have bedbug problems. You can use a duster or a small paintbrush to apply it to cracks and crevices, such as underneath baseboards and in wooden furniture.

Resist the temptation to think that more is better and apply it in deep piles. You want only a faint dusting that can just about be seen with the naked eye. Bed bugs won’t crawl through a deep pile of dust, but they will walk over a light coating, and that’s what kills them.

Diatomaceous earth is safe to use. You can even get food grade diatomaceous earth which is added to animal feed, and some people consume it for its health effects. However, because it’s so fine, it’s a good idea to wear a painter’s mask while applying the dust so that you don’t breathe it in.