You’ve probably seen an advertisement for an “ultrasonic Mosquito Repeller”. Some come as wearables – like a watch or necklace – whereas others are stand-alone gadgets.

These devices claim to repel mosquitoes by using ultrasonic sound waves. Some manufacturers even claim their devices are “military-grade.” Though this sounds incredible – you should know that the claims are almost entirely bogus.

In this article, we break down the science behind ultrasonic mosquito repellers and dispel the myths about how they work. If you’re looking for something that definitely does work, check out the Dynatrap. We did a full test on the product and found it to work excellent. 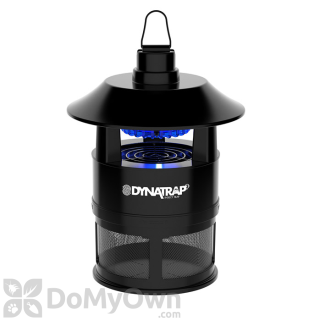 The Dynatrap is a quiet but powerful portable trap that attracts and kills pesky flying insects without zapping.

If you haven’t seen the advertisements, let us save you some valuable time. The devices claim that by emitting really high-pitched sounds (ultrasonic waves), the nervous system of mosquitoes is disrupted – leading to a repellent effect and even death in some mosquitoes.

Since mosquitoes in the U.S. and other parts of the world are a constant nuisance that leaves irritating bite marks and spread disease, it’s no wonder that people are looking for an amazing technological solution to this age-old problem.

Plus, when you are out hiking, hunting, or tromping through the woods, you are at the mercy of the environment. Without protection, you’ll be eaten alive by those tiny blood-suckers!

So, are ultrasonic pest repellers the answer we’ve all been looking for?!

What are Ultrasonic Mosquito Repellers?

Using some clever circuitry and a tiny speaker, it is possible to produce sound waves that are above the frequency that humans can hear. The human hearing range ends at around 20 kilohertz (kHz), while these devices typically operate in the 38-44 kHz range.

Some of these ultrasonic mosquito repellers look like a nice digital watch, while others are intended to be plugged-in and placed on a table or patio to provide protection to a larger area.

Several other brands produce repellers with small clips that you can attach to a backpack and small portable versions that can be placed in a campsite.

There are probably upwards of 30 companies marketing these products, and they can be found all across the internet. The brand SonicShield, for instance, claims that the “Institute of Biomedical Ultrasound” liberated “military technology” for the general public that “effectively damages [mosquitoes].”

A quick Google search for the “Institute of Biomedical Ultrasound” turns up no results – it doesn’t exist. In fact, “ultrasound” is a completely different technology than “ultrasonic.” That should be warning sign #1.

Second, the only scientific paper that showed any effect on mosquitoes is a paper from a University in Indonesia that was published in 2009.

Though the researchers tested only 300 mosquitoes split into two groups of 50 over 3 trials, they claimed that their ultrasonic device effectively killed 74% of the mosquitoes in the test group.

While this sounds great, their methodology is not explained, did not test if mosquitoes were repelled, and many important aspects of the scientific method were ignored.

The heat emitted by the device in the test chamber could have been responsible for the mosquito deaths, but we will never know because the researchers didn’t bother to record the temperatures of the test chambers (or a number of other important variables).

Lastly, companies like SonicShield like to cite one other paper that claims in the abstract that ultrasonic waves in the “frequency of 38-44 kHz can be used effectively to repel the mosquitoes and flies.”

If you actually get access to this paper and read it, there were no actual tests done on mosquitoes at all. This paper is simply from the 2016 International Conference on Wireless Communications – the authors were providing a design for a new device and did not test it on insects at all.

“Ultrasonic waves at a frequency from 38 to 44 kHz caused 100% larval mortality at a distance of 60 cm. Exposure to the soundwaves effectively damaged [mosquitoes] making it a great alternative tool to reduce mosquito populations.”

They provide no links to any studies, and it appears that they have not even broached the scientific literature on the topic.

A Hard “NO” from Many Other Studies

Though this entire multi-million dollar industry seems to be relying on the two papers above to justify their products, actual efficacy tests of ultrasonic devices have failed numerous times – on mosquitoes, rodents, birds, cockroaches, and many other pests!

Studies specifically on mosquitoes have shown that ultrasonic devices do not work – at all. A laboratory study in 1985 concludes:

“For all species there was no significant difference between the numbers trapped when the devices were switched on or off, when all devices were tested simultaneously. Tests of individual devices against Ae. aegypti also failed to show a repellent effect.”

However, the ultrasonic repellent industry persisted. In 2007, researchers “cranked up the volume” and blasted mosquitoes with rock-concert-level ultrasonic noise. Still no effect.

In 2008, another study was conducted on both cockroaches and mosquitoes. The researchers concluded:

“The ultrasonic devices were ineffective in eliminating or repelling the insects and one of the devices gave off sound radiation which could be potentially harmful.”

Not great. Still not convinced? In 2015, researchers at the University of Arizona compiled all of the studies over the last few decades. The most interesting thing they found:

“Interestingly, some devices marketed to repel mosquitoes have been shown to attract mosquitoes. A study that tested three commercial sonic devices found that with the devices activated there was an increase in bite-rate by as much as 50%.”

They also noted that the sounds might annoy your dog. Ultrasonic mosquito repellers, you’re busted!

How Can I Repel Mosquitoes?

Using sound waves to repel mosquitoes is silly for a number of reasons, but the most important reason is that mosquitoes do not rely on hearing to hone in on their prey.

In fact, we don’t even know if mosquitoes can hear ultrasonic frequencies.

Instead, mosquitoes rely mostly on their sense of smell. Specifically, they seek out carbon dioxide – a gas you give off as you breathe. When they get close to the source, they also use the smell of your sweat and skin to guide them to the perfect biting position.

The most effective mosquito repellents also rely on smell. Products like Thermacell , DEET, and Oil of Lemon Eukalyptus are chemicals that “attack” the sense of smell. In some cases, these chemicals are even strong enough to kill mosquitoes that get too close.

You should also be warned that “wearable” mosquito repellents that rely on smell/scents like stickers and bracelets are also not proven and very unlikely to actually work. You’re going to need to apply a spray to repel mosquitoes!

Other repellents and insecticides attack the mosquito nervous system directly. If you are serious about repelling mosquitoes, there are many different applications that require different approaches.