So you found some spiders in your home and now you’re looking for a spider bomb or spider fogger it wipe them out all at once. It’s better than burning the house down, right?!

A “spider bomb” is an appealing concept to many homeowners dealing with an intense spider infestation or just anyone with arachnophobia. It sounds easy enough – just set off the pesticide bomb in your house, leave for a few hours, and come back home to no spiders.

But it is so simple? I’m going to tell you today why using a spider fogger isn’t really a good idea, and why you should use a more concentrated approach to getting rid of spiders.

If you aren’t convinced, I’ll still give you some fogger recommendations and tips for using them!

Why Even the Best Spider Bombs Aren’t Great

For starters, the pesticide used in a fogger is not necessarily the best one to use for killing spiders. Almost all foggers are made to target insects that are not arachnids.

Another thing about the pesticide in foggers is it’s a weaker concentration than sprays you would manually apply. Since a fogger essentially just shoots pesticide up in the air to fall down and cover all surfaces, it can’t safely be as powerful as those that you apply in a controlled manner.

Another reason why you shouldn’t use a fogger is that they actually don’t kill as many spiders as you think they will. Since a fogger shoots the pesticide up and lets it fall to the ground, it’s mostly only covering surfaces.

How often do you see a spider just hanging out on the surface of something? Not very often! They’re usually deep in the corners of rooms, up around the ceiling, or hanging out on the wall where foggers aren’t going to stick well.

Foggers can easily be set off accidentally by children or pets who may touch them or move them around. This can be a particular problem if you have young children at home. If you do use a fogger, make sure that it is placed in an area away from the reach of children and pets. Once a fogger is set off, there’s no stopping it!

Also, some people have reported respiratory problems from using foggers. These individuals have reported breathing problems immediately after a fogger has been used.

It isn’t hard to imagine why this is the case – an aersol can blasting a cloud of pesticides into the air is sure to have some residual particles hanging around! Most foggers recommend waiting at least 4 hours before re-entering the home, but the longer you can hold off the better.

The final safety concern is the potential for a fire or explosion. You should unplug all major appliances before using your fogger and make sure all pilot lights are out. Water heaters and gas fireplaces are examples of appliances with pilot lights that you’ll need to make sure are extinguished before use.

That being said, most stories you hear about these bug bombs causing fires are due to someone using way more cans at once than they should.

A Smarter Alternative to Spider Bombs

You just need a 1 gallon sprayer and my recommended insecticide, Demon Max. 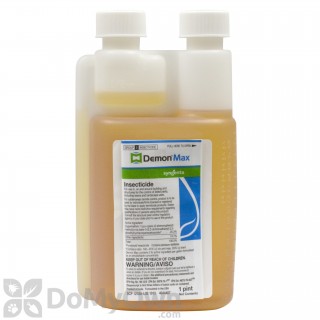 Demon Max provides long-lasting killing power for almost all insects and spiders. Spraying just once in spring can significantly reduce the pests you come across for the rest of the year.

To apply the Demon Max, you’ll just mix ~1.3 ounces of it with a gallon of water in your sprayer, and then apply the spray carefully in the areas where spiders are most likely to be or where you have seen them.

Along the cracks and corners of basement walls is a likely hotspot, as well as garages. Spiders typically like dark areas where they can stay hidden. You can also apply this along the exterior of your home where spiders are likely to try to come in and out like along window sills, door frames, and any cracks in the foundation.

This is pretty much it. It shouldn’t take you longer than 30-60 minutes to complete start to finish, much faster than setting off a spider fogger and waiting 4+ hours to re-enter your home.

This also keeps the pesticide limited to areas where spiders are likely to come into contact with it, which means your kids and pets aren’t going to contact as much residue.

If you’re still not convinced and think a spider bomb is what you need for your home, here are a few recommendations.

One benefit of foggers is even if they don’t do a great job at killing spiders directly, it’s possible that by killing other crawling insects that the spiders feed on, there will be fewer food sources for the spiders which will make your home less habitable for them. 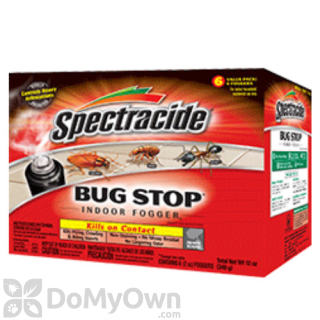 Spectracide Bug Stop Indoor Fogger will provide an effective solution to the flying, biting and crawling insects problem inside your home. It contains a combination of Tetramethrin and Cypermethrin as its active ingredients which effectively kills target pests on contact within 2 hours after application, as well as control heavy infestation.

This Spectracide indoor fogger is one of the few that actually claims to be able to help control spiders. I would recommend using it only in an area where you’re seeing spiders, such as your basement. Be sure to open up all closet doors and try to remove all clutter before using it. This will leave the spiders with less places to hide. 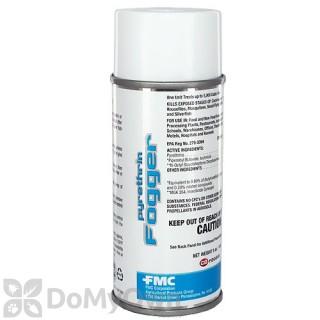 Effectively removes all cockroaches, fleas, ticks, houseflies, mosquitoes, moths, wasps, crickets, or silverfish within the confines of the fumigated area. This product contains natural based pyrethrins making it ideal for use in sensitive areas such as homes, schools and hospitals.