The Problem with Moles

Moles can be a real pest! Though moles may not eat the plants in your yard directly, they do create unsightly molehills and can undermine plant root systems – killing everything from vegetable gardens to your grass!

There have even been instances of mole tunnels so extensive that large trees fall over – damaging homes and property, and potentially putting lives at risk. The tunnels they create in your lawn can be hidden, creating a dangerous tripping hazard that could harm pets or children trying to play.

So, if you want to know how to get rid of moles on your property, you should take action with the best mole traps before it’s too late!

Why Use a Mole Trap?

There are three basic methods to get rid of moles on your property.

You can drive them away by eliminating their food source.

You can try to repel them with noxious substances.

Or, you can trap them.

Of these three methods, trapping is really the only effective way to ensure that moles leave your property.

For one, eliminating their food source is almost impossible and can make your lawn and garden less healthy. Moles eat worms, grubs, and underground invertebrates like slugs. These creatures are extremely hard to eliminate with traditional pesticides because most pesticides can not be effectively applied directly into soils.

Further, if you eliminate all the worms from your yard they will no longer provide benefits like nutrients and aeration for your plants!

As for repelling – there are no scientifically proven mole repellents on the market. Some DIY solutions like spreading castor oil have anecdotal evidence, but it’s only a very temporary solution.

Trapping moles is relatively easy, only takes a bit of knowledge and planning, and most traps are very easy to set up!

There are dozens of different mole traps out there, so we have curated a list of the very best mole traps for you to choose from! We have ranked these traps in the order of their customer reviews.

The Wire Tek Mole Eliminator is one of the best selling scissor traps on the market. Setting the trap is a breeze – simply find an active mole tunnel, place the trap on the surface with the blades in line with the tunnel, and step down on the bar on top of the trap.

This motion plants the device at the right depth opens the scissors. This locks the trap in place. Though this trap does not have a brightly colored indicator, you can easily see if the trap has gone off based on the position it is in.

These traps are made in the US of high-quality stainless steel that should hold up forever. The listing above is for a set of 2 traps.

The GopherHawk Snare Trap is a great choice because it can be used on moles, gophers, and voles. The kit comes with a trap, a probe, and a wedge tool.

First, you use the probe to locate a tunnel. Then, you use the wedge to expand a hole into the ground that the trap will fit into.

Finally, you simply insert the trap into the hole and set it by pulling upward on the neck. The trap sits vertically in the ground, so you can tell when it has been tripped because the spring will be visible. No shovel required!

The above kit comes with the probing and setting tool, and if you want additional traps to set you can buy those individually.

This trap is very easy to set, as you simply find a surface tunnel, step down on the trap to push it into the ground, and pull up on the handle.

The trap is extremely sensitive, and instantly launches harpoons into the ground when a mole disturbs the soil below it. Though this trap has fewer ratings than other traps, harpoon traps are efficient at killing moles quickly.

Some people have complaints about the spears not reaching deep enough in their mole tunnels to kill the moles, and that the plastic elements of the trap don’t hold up well overtime. This trap is cheaper than most, so it’s a tradeoff to keep in mind. 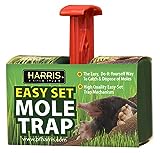 The Harris Easy-Set Trap is certainly effective, though the name “Easy-Set” is a bit exaggerated. Compared to other traps on this list, the Harris Trap requires extensive and exact digging to set the trap properly.

First, you must identify a surface tunnel. Then, you must find a 6” section of tunnel that is relatively straight. Using a shovel, you must excavate the exact size of the device, an place it carefully in the hole.

Once the trap is in the hole it is relatively inconspicuous, safe for pets and family, and has a clearly marked indicator to let you know when the trap has been triggered.

All of the springs and trapping components of the trap are sealed inside the plastic box which is a benefit for those new to traps as it feels much safer. If you have dogs or children in your yard often then you may feel more comfortable with a trap like this. 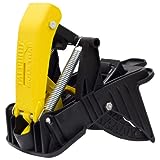 The Talprid Mole Trap is an upgrade on the traditional metal scissor trap. The Talprid Trap is made out of heavy-duty nylon materials that can be used over many seasons with little wear.

The Talpid trap is set like other scissor traps – simply place the jaws in line with the tunnel and step on the top of the trap. The jaws will push into the soil, open up, and lock in place. Like other scissor and harpoon traps, this trap should not be accessible to children or pets.

When is the Best Time to Trap Moles?

Regardless of which of the traps below you wish to purchase, timing matters when it comes to trapping moles. Moles are excellent tunnelers and their tunneling behavior changes in different seasons.

Like most animals, moles need to regulate their body temperature and avoid extremely high or low temperatures. Therefore, moles will tunnel to different temperatures in different seasons.

In general, summer and winter are both bad times to trap moles. In summer, moles tunnel very deep to avoid the hot, dry surface soils. In winter, moles return to these deep tunnels to avoid freezing temperatures at the surface. So, the best times to trap moles are in the spring and fall.

During the spring and fall, the surface soil is moist and full of prey. The temperature is consistently tolerable, so moles will spend most of their time right near the surface.

Most mole traps must be inserted or setup within a mole tunnel. So, your best bet for catching moles is when they are moving through these shallow surface tunnels.

While it is still possible to catch moles during the summer or winter months, you will have to dig much deeper to set your traps and it is much harder to figure out which tunnels the moles are actually using.

There are several different types of mole trap on the market, each with unique features:

Mole traps most often rely on a powerful spring and a very sensitive trigger. So, you should always follow the manufacturer’s instructions when placing your traps. Most of the traps above are fairly easy to set, and as long as the implements are in the ground you should be safe. Still, there are some general safety precautions you should take.

Moles, unlike gophers and voles, are much more reliant on their sense of smell to detect danger. Therefore, if you set the trap with bare hands they will definitely smell that a predator has been in the tunnel and will not approach the trap. Wearing gloves – such as leather gloves or latex gloves – will mask your scent so the mole will approach the trapping area.

The key to finding active mole tunnels is to test them. If a mole is actively using a tunnel, it will quickly repair any damage in the tunnel. You can easily perform a test by puncturing the top of the tunnel with a wooden dowel or a gloved finger. Damage several tunnels in your yard, then wait about 24 hours.

Mark the tunnels you damaged with a flag or stick so you don’t forget where they are. If the damage has been repaired after 24 hours, the tunnel is active and you can set a trap in it. You can learn more about finding active tunnels on this site from the University of Minnesota.

One of the main reasons that trapping fails is that the user fails to follow all of the instructions. Since traps are so different, they have very different setup instructions.

However, there are a few tips that will help make any trap more successful. First, make sure that no light or air is entering the tunnel after the trap is set. Moles will sense this, and may abandon the tunnel.

Second, try to disturb the tunnel as little as possible when setting the trap. If you cause too much damage to the tunnel, moles may decide to dig a new tunnel right around your trap!

There are several reasons to check your traps often. If a mole hasn’t tripped the trap in 12 hours, it may indicate that you have not placed the trap on an active tunnel.

Plus, traps may not fully kill the mole, and it is unethical to let the mole suffer for a long time until it dies. You may need to carry a shovel or machete with you to finally dispatch the mole and end its suffering.

Lastly, if the mole does die it will begin to decompose quickly. Leaving a dead mole in the trap will certainly create a stinky mess if left for too long. When you do catch a mole, reset the trap in the same tunnel. Families of moles sometimes use the same tunnels.