Fleas are unfortunately not just a problem for your dogs or cats. These tiny, sneaky insects can infest your entire house. Fleas are insects in the order Siphonaptera, and like that name suggests, they are irritating little bloodsuckers. Most flea infestations start with a pet, but soon the fleas can spread all over your home, becoming an unsanitary nuisance.

There are several reasons why fleas are quite difficult to get rid of in a home. First, they are very small – just a few millimeters long. Flea eggs are also incredibly tiny – look how small they are on a finger tip!

They also spread very easily. It’s possible to have and spread fleas even if you don’t have pets because they can be spread by wild or stray animals outside the home, and they can even bite humans.

As usual, we are here to help. This article is all about flea bombs, which are one (but certainly not the only) method for getting rid of fleas in the home.

We’ll cover what flea bombs are, how they work, and when it might be time to use one. Equally important, we’ll also let you know when you might not want to use a flea bomb and may be better off with another method.

A flea bomb, sometimes called a fogger or total release fogger (TRF), is a pest control product that releases a lot of pesticides at once into an enclosed space. They work by activating a switch on the “bomb” and placing it inside the house, where it will release pesticides that fill the home and cover everything in it.

And we do mean everything! When activated, the aerosol can will start spraying the product high up into the air and dispersing it around the entire room. The pesticides in the air will float down and cover every surface and object in the house.

The usual pesticides found in flea bombs are most often pyrethroid, pyrethrin, or both, which are industrial-strength pesticides. Bombs also frequently contain precor IGR, which works on younger fleas to stop them from maturing and breeding. So choosing to use a flea bomb in your home is not a choice to be made lightly.

How to Use Flea Bombs

Using a flea bomb can be rather inconvenient, and there are a number of steps involved:

Everything that stays in the area is going to be covered in pesticides. This means that as much as possible (that you can be sure isn’t hosting fleas) should be removed from the house prior to using the flea bomb. Food, cookware, toiletries, children’s toys, pet toys and food bowls, and of course all pets and people.

Clothes can be tricky because fleas and eggs like to hide in them, making the flea bomb less effective. One option is to bag all clothes and then wash them at a laundromat while the flea bomb is spraying.

Any source of flame is also dangerous for a flea bomb, since the pesticides they release are highly flammable. Make sure there are no lit candles in the home and turn off any pilot lights, electrical appliances, and lights.

The house should also be staged so that the pesticides can reach every part of the home. Close all doors and windows to the outside, but open doors between rooms, even closets and drawers in severe infestations (though this will cover clothes in pesticides, which will require washing later).

Recommended flea bomb – Precor Plus Fogger. This comes in a 3-pack where each can can treat up to 3,000 cubic feet. The pesticide it uses will kill fleas quickly, and also contains an insect growth regulator that should prevent re-infestations for 7 months. 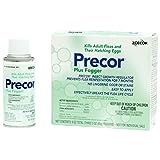 Follow all the instruction on the packaging for the flea bomb you’ve purchased. A flea bombs will spray chemicals for several hours after it has been activated, some for as long as eight hours. It is important to ensure that you, your family, and your pets will be able to stay out of the house for this long.

This gives the pesticide time to fully disperse and float back down to the ground, so when you return you won’t be breathing in a cloud of pesticide.

The most important thing after the flea bomb has finished spraying is to clean up and air out your home. Open all windows and doors to maximize airflow. The smell of pesticides may persist for several hours, or even days in larger homes. Give it as much time as possible before going back in, at least a few hours.

When you’re back in the house, clean everything. Wipe down all surfaces that may come in contact with food, especially. Now is actually a great time to vacuum as well. Using a vacuum will pull the flea hatchling and eggs up to the surface of your carpets where it will come into the strong pesticide, helping to break the cycle sooner. Vacuum daily.

Monitor your homes for fleas in the coming weeks. Sometimes some eggs survive the flea bomb and hatch later. It’s possible you may need to flea bomb again, but there should be enough residual pesticide that the fleas die out on their own.

Why are Flea Bombs not Usually Recommended by Professionals?

Most professionals do not recommend flea bombs in the home. Flea bombs are sort of like barging into the home and spraying gallons of pesticides onto every surface. Would you feel comfortable taking a gallon sprayer and dousing your entire home with pesticides, even where you know there are no fleas?

The idea of the flea bomb is convenient, but it’s not as safe or effective as applying the chemicals directly to affected surfaces like floors and pet bedding. They might be useful in extreme cases, or in unoccupied homes, but they are inconvenient and ineffective for most normal people.

They can also be unsafe. No matter how well you clean, it is possible to be exposed to pesticide left over from flea bomb treatments, or even ingest them. Pesticide ingestion is also a big issue for pets, because they typically put their mouth on more surfaces than we do. You may have to keep your pet out of the house for even longer than your family after a flea bomb treatment.

Flea bombs are certainly not the be all and end all of flea treatment. There are many other options that are much safer and often much more effective.

We have a full guide to treating for fleas everywhere, not just in the home, but here are some of the highlights: 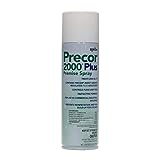 If you’ve read this far and still believe a flea bomb will be right for you, you deserve to have the best that the market can provide. Here are some good options for flea bombs:

Are fleas dangerous for humans?

Thankfully, not particularly. They are mostly just inconvenient. Fleas do not pose a major health risk to humans, but the itching their bites can cause can lead to infection (but this is true of all insect bites). Fleas do not carry any human pathogens and cannot generally cause enough blood loss to be problematic.

Are fleas dangerous for my pets?

Fleas are not much more dangerous for pets, but they do increase the risk of certain health problems like anemia and infections with tapeworms. Some pets may also experience an allergic reaction to fleas, meaning that they may feel even worse than you do!

Will fleas go away on their own?

Unfortunately, no. Most flea infections will not go away on their own. While they may sometimes die out during cold weather, in many more cases a small number of fleas remain behind and multiply further once warmer weather hits.